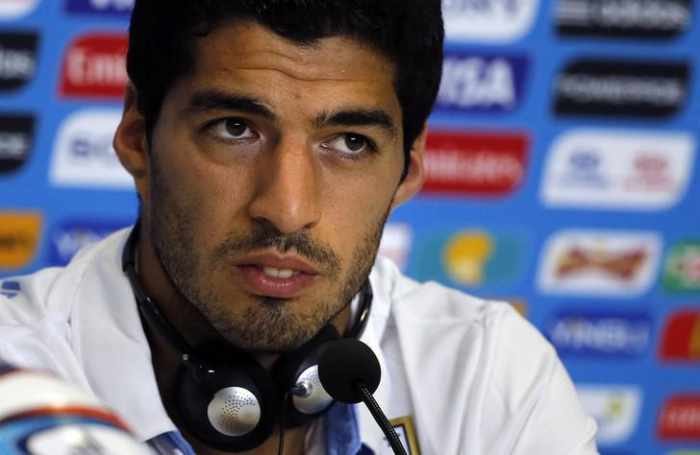 PHUKET: Uruguay’s Luis Suarez was hit with the biggest ban imposed at a World Cup on Thursday as FIFA threw the book at one of soccer’s most talented but controversial players for biting an opponent.

The sport’s governing body suspended Suarez from all football-related activity for four months and ruled he could not play in Uruguay’s next nine competitive games, meaning he is unlikely to appear in non-friendly matches for his country until 2016.

The ruling ended Suarez’s World Cup and his lucrative off-field sponsorships are now in doubt.

“Such behaviour cannot be tolerated on any football pitch, and in particular not at a FIFA World Cup when the eyes of millions of people are on the stars on the field,” Claudio Sulser, chairman of the Disciplinary Committee, said.

The four-month ban means Suarez will have to sit out the first two months of the next English season and he will miss Liverpool’s opening Premier League and Champions League matches.

The 27-year-old striker must immediately leave his Uruguay team mates who are preparing for a World Cup last-16 match against Colombia on Saturday.

The Uruguayan FA will appeal against the ruling, but Suarez cannot play even if a challenge is lodged. The imposition of the fine could be delayed pending the appeal.

Suarez is one of the most gifted players in world football, scoring 31 league goals in 33 games for Liverpool last season.

He returned from a month on the sidelines with an injury to score twice in Uruguay’s 2-1 win over England last week, transforming the team’s World Cup which began with a loss to Costa Rica in a game Suarez missed through injury.

But he is also one of the game’s most troubled players and has been banned twice previously for biting opponents.

“Football must set an example and show examples of good players,” he told reporters. “People who are out of line must be punished.

“If my little children bit me, they are sent to the dark room with the big bad wolf. This is football’s equivalent.”

Suarez will not be able to train or attend matches with Liverpool until late October, a huge blow to their domestic and European ambitions.

“Liverpool Football Club will wait until we have seen and had time to review the FIFA Disciplinary Committee report before making any further comment,” Liverpool chief executive officer Ian Ayre said on the club’s website.

Although FIFA has banned many players for life and issued other lengthy playing bans, this is the record punishment imposed for wrongdoing at the World Cup, surpassing the eight-game ban handed to Italy’s Mauro Tassotti for breaking the nose of Spain’s Luis Enrique in 1994

As well as the biting cases, Suarez was banned for one match at the last World Cup in South Africa for a deliberate handball that cost Ghana a match-winning goal in a quarter-final.

The latest incident occurred in the tense final minutes of Uruguay’s last Group D match against Italy, shortly before the South American champions scored to seal a 1-0 win and knock Italy out of the tournament.

Suarez clashed with Giorgio Chiellini and the defender pulled open his shirt to show the mark to the referee, who took no action.

The ruling may have long-term repercussions for Suarez off the pitch. His sponsors had said they would decide on their relationship once the outcome of the investigation was known.

German sportswear firm Adidas stopped short on Thursday of axing Suarez but said it would not use him in any further World Cup marketing.

“Adidas certainly does not condone Luis Suarez’s recent behaviour and we will again be reminding him of the high standards we expect from our players,” a spokeswoman said.

Suarez’s value in the transfer market, estimated to be at least 50 million pounds, could also be affected should Liverpool decide to sell him.

He served a 10-match ban last year after biting Chelsea’s Branislav Ivanovic in a Premier League match and in 2010 he was suspended for seven games for biting PSV Eindhoven’s Otman Bakkal while playing for Ajax Amsterdam.

The other major controversy of his career came in 2011 when he was alleged to have racially abused Manchester United’s French defender Patrice Evra during a Premier League match.

He was banned for eight matches and fined 40,000 pounds for that and was then handed a further one-match ban for making a gesture at Fulham fans. When Liverpool played United in the return match he refused to shake Evra’s hand before the game.

Ronaldo misfires as Portugal and Ghana bow out