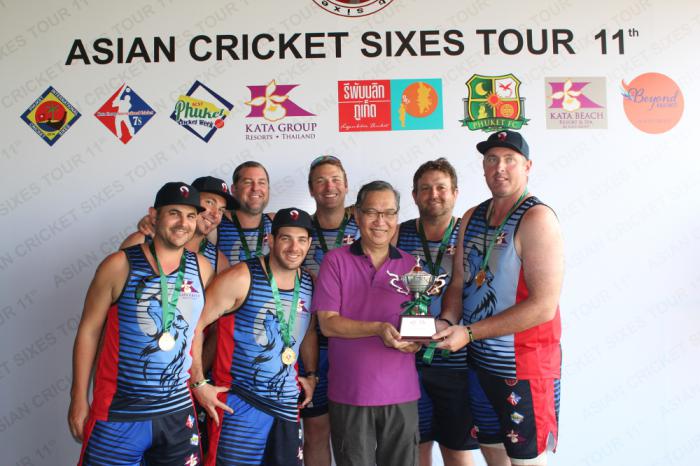 Captained by Australian Indoor Cricket Team champion Will Badger, the Wolfpack fought back to defeat the Galah Cricket Team, who had been admirable opponents during the Kata 7s.

Wolfpack had defeated Phuket Cricket Week first timers Montagu Bay Sharks from Tasmania, Australia to claim a coveted spot in the Cup division final. In this game Wolfpack’s Matt Jenkins started well by hitting a four to the offside and followed up with other nice shots before retiring on 31. Scott Maitland, who opened with Jenkins, hit a magnificent six and formed a formidable partnership of 61 to win the match.

The Galah Cricket Club had defeated Sedwick Cricket International Cricket Club of Sixes (SICCOS) earlier, setting up a rematch from day one where they had beaten the Wolfpack. The Galah’s Matt James hit an unbelievable one-handed six with incredible ease off the bowling of Jordan “Moose” Ilsley.

The Wolfpack got off to a strong start in the Cup final against the Galahs with Matt Jenkins’ first ball getting out Galahs’ Peter Dickie for a Golden Duck. This was followed by David Newham hitting the best shot of the tournament – a big six down the ground off Steve Hancox’s bowling. Newham continued to show outstanding skill with the bat to make 20 runs before being bowled. Steve Hancox later took a sensational catch on the boundary, diving to safely dismiss Jake Wright. Will Badger limited the Galah’s to only six runs off his over.

Earlier CBBs had won the Bowl division final by defeating the Rowdies by 23 runs. CBB President Bob “Tiny” Phillips bowled tightly in the last over to seal victory for the CBBs. This feat earned Tiny the player of the finals in the Bowl division.

The Wolfpack’s Matt Jenkins took player of the tournament; with Will Badger being presented with the Spirit of Cricket award. Steve Hancox completed the “three-fer” for the Wolfpack when he was announced as the player of the finals in the Cup division.