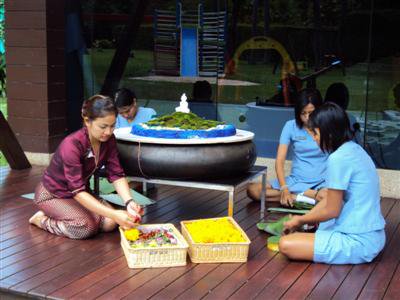 PHUKET CITY: Scissors are busy clipping banana leaves at resorts and schools around the island as Phuket prepares for the Loy Kratong Festival that takes place at dusk today.

The Buddhist festival, held annually on the full moon of the twelfth month, is celebrated throughout Thailand.

In addition to venerating the teachings of the Buddha, the ritual act of floating away the candle raft symbolizes a release of negative emotions and defilements, allowing believers to start life afresh.

Many people add fingernail and hair clippings to the raft as a physical embodiment of this wish for renewal.

In Phuket, the festival follows hot on the heels of the Vegetarian Festival and Halloween, which was celebrated by many members of the expatriate community and is increasingly popular among Thais despite its pagan roots.

People taking part at places like Saphan Hin can also expect any unexploded ordinance left over from the Vegetarian Festival to be detonated, as the lighting of fireworks has also developed into part of an otherwise beautiful and sedate tradition.

Many people take great care in making their own kratong, but those with less time can also buy beautiful ready made kratong at locations where the festival takes place.

Skies are mostly clear over the majority of Phuket today, but the forecast from the Meteorological Department for the 24-hour period starting at 4am today calls for scattered showers over 30% of the island.

Some of the larger floating sites on the island will be as follows:

WICHIT: Klong Mudong, the mangrove forest on the way to Khao Khad

PATONG: On the beach opposite Soi Bangla

In addition to the floating of the kratong, there are also stage performances and contests for the most attractive kratong and beauty contests for children and young ladies.