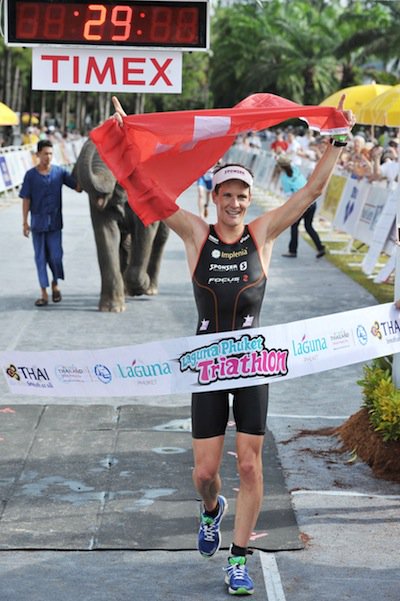 PHUKET: Swiss Olympian Ruedi Wild produced a clockwork performance in his debut at today’s Laguna Phuket Triathlon to snatch the title from a top-class field of fellow pros in just under two and a half hours. He become his country’s first-ever winner of the iconic endurance event, now in its 19th year.

In the women’s field it was another Olympian, Radka Vodickova of the Czech Republic, who triumphed with her third Laguna Phuket title to bring heartbreak for Australian Belinda Granger, the fellow two-time Champion also vying for Triple Crown in her 10th appearance at the event.

A field of almost 700 individual pro and age group athletes representing more than 40 nationalities started the race at dawn, 6.30am, on the beach at Phuket with a 1.8km swim, followed by a 55km bike ride and a 12km run. There were also 61 relay teams taking part amid the event’s renowned festival atmosphere.

Wild was among a chasing pack behind runaway leader, American Ironman bike specialist Chris Lieto, who was a minute and half ahead out of T2 into the run after a storming bike leg of 1:20:54.

But Lieto, whose season has been affected by Achilles problems, faded as the temperature rose in the morning sun, and he was soon overhauled by the hard-running Wild and other members of the pack.

“Running is my strength and I knew that if I was less than two minutes behind Chris at the start of the run I could catch up and overtake him,” said Wild, a 12-time Swiss Champion who spent 10 days training in Phuket before the race to get acclimatized to the tropical heat.

“I’m so happy to have won today. I’ve heard so much about this fabulous race and it’s been on my list to do for a while. This is my first time in Thailand and it’s been a fantastic experience – I hope to come back to defend my title next year,” he said.

But it was a disappointing day for another Italian, defending Champion and three-time title holder Massimo Cigana, who could only manage fourth place in 2:33:41.

Lieto finished seventh in 2:40:29 and another top pro, legendary two-time Ironman World Champion Chris McCormack of Australia – making his much-vaunted “Race of Legends” debut – was also off the podium positions at eighth place in 2:45:44.

However, Lieto, McCormack and Cigana will have a chance for revenge next weekend when they race the Ironman 70.3 Laguna Phuket against Wild and some 150 other athletes who raced today and will stay on this week for Laguna Phuket’s “Tri-Fest” leading up to the Ironman 70.3

Vodickova, who led the women’s field from start to finish and crossed the line more than seven minutes ahead of second-placed Granger, was even able to afford herself the luxury of easing back on the run – with one eye on next weekend’s Ironman 70.3, which she will contest again with Granger and an elite field including current double Ironman and Ironman 70.3 World Champion Leanda Cave.

“I love this race and I’m very happy to have won it for the third time,” said Vodickova.

“I went very hard from the start and was able to stretch my lead and relax a bit on the run towards the end. Next weekend will be a really hard race, but to win today is a great confidence booster,” she said.

Top amateur male finisher was Ben Greenfield of the USA who took ninth position with 2:47:02 and the top amateur female was Nickey Barnard of South Africa who finished in 3:10:44 at 67th overall to take the fourth women’s place.

Top Thai male finisher was Jaray Jearanai who finished 17th in 2:52.15; and topThai female was Nampetch Porntharukcharoen at 280th overall in3:40:10.

The Laguna Phuket Triathlon is proudly sponsored by the Phuket Gazette, PGTV and the nationally televised Phuket Today show on UBC/True Visions. Phuket Today, co-produced by PGTV and MCOT World, provided coverage of this event. The half-hour show runs six times a week, starting every Sunday at 7:10pm