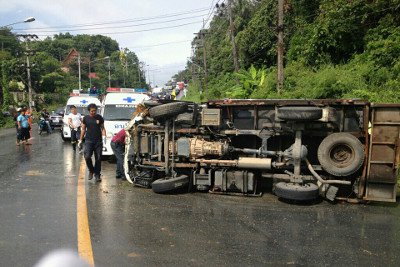 PHUKET: Eight people were injured this morning when a pickup truck converted into a small bus flipped onto its side while descending Karon Hill.

Phuket City Police Capt Thada Sodarak told the Phuket Gazette that the accident occurred at about 10 am near the sharp “Sator Curve” while the vehicle was descending the hill heading towards Chalong Circle.

Officers arrived at the scene to find a white Isuzu pickup emblazoned with “Phuket Big Buddha Association” lying on its side.

“Not far from the vehicle we found the driver and seven passengers still on the road,” Capt Thada said.

“The pickup was heading from Karon to the Big Buddha [monument] in Chalong,” he added.

Police believe the driver lost control on the sharp curve because the road was slippery.

“The driver could not control the vehicle, and so it flipped over,” Capt Thada said.

All eight injured were taken to Vachira Phuket Hospital in Phuket Town.

Police are questioning witnesses and collecting evidence to identify the exact cause of the accident.