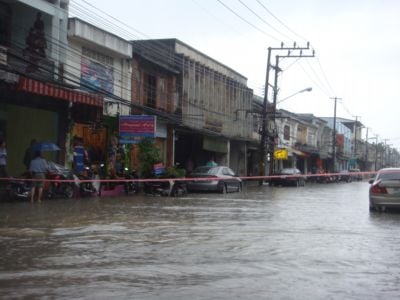 PHUKET CITY: Those hoping to spend this weekend basking in sunshine on Phuket’s beaches will be disappointed, if the Met’s predictions are anything to go by.

The weekend is expected to be a washout.

Chokchai Patarayongphaisarn, a Phuket Meteorological Department forecaster, predicted the heavy rain pouring down over Phuket would continue until Wednesday.

And there was worse news to come.

“Expect the heaviest rain of the year so far in September,” Mr Chokchai said.

From 6am until 4pm today, there were 62mm of rain recorded in Phuket City, 50mm in Karon, 75mm in Pa Khlok and a massive 113mm in Kamala, according to Mr Chokchai.

Meanwhile Chaiwat Warudomsuthee, a Department of Disaster Prevention and Mitigation officer, warned those living in high-risk areas to beware of flash flooding and landslides.

Small boats should not set out to sea, while larger vessels should beware of high waves and strong wind, he said.

Floods have been reported in several parts of the island today, following some of the heaviest rain so far this month.

This afternoon, Phuket City fire officers rushed to Surin circle (the clocktower circle) to pump away floodwater there.

At around 4pm today, Yaowarat Road in Phuket City was flooded with around 30 centimeters of water.

In the morning, flooding was reported at Chalong power station on Chao Fa West Road.

Chalong Tambon Administration Organization sent fire engines to the station to pump out the water.

Surachai Kuatkaew, a communications officer at Patong Municipality, said there was flooding this morning at Kalim Intersection, Sainamyen Intersection and along the road next to Patong Hospital.

The Municipality sent fire engines to pump out the water, but following heavy rain this afternoon, floodwater has accumulated again, he said.