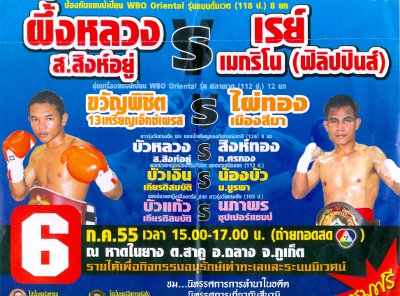 PHUKET: Due to weather concerns, the venue for the much-anticipated WBO Oriental flyweight fight between Thai boxer Pungluang Sor Singyu and Filipino Rey Migreno has been changed from Nai Yang Beach to the multi-purpose hall at Phuket Airport.

The card, staged to raise money for sea turtle conservation efforts, will get underway at 2pm with a bout pitting a female boxer from Britain against a Thai opponent, according to a press release by Phuket Provincial Hall.

Televised coverage will begin at 3pm and run through to 5pm, after which time a baby turtle release ceremony will be held walking distance away at Mai Khao Beach.

The beach, Phuket’s longest, was once renowned across Thailand as a premier nesting site for the enormous leatherback sea turtle and other sea turtle species.

Unfortunately, reports of nestings at Phuket beaches are now about as rare as wins by Filipino boxers against their Thai opponents in the Channel 7 boxing event series.

The decision to move the bout indoors was probably a wise one, however. The latest 24-hour forecast, issued at 11am by the Thai Meteorological Department center at Phuket Airport, calls for: “Very cloudy conditions with fairly widespread thundershowers covering 80 per cent of the area and isolated heavy rain with wind gusts; southwesterly winds 20kmh to 35kmh; wave heights about two meters, higher in rain areas.”