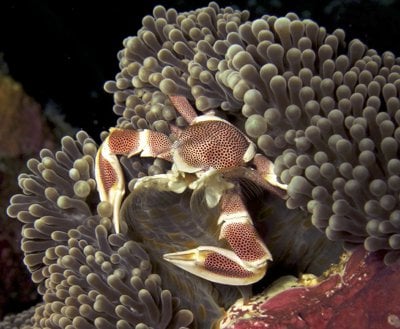 PHUKET: Watching the sun set behind Koh Doc Mai from the top deck of Sea Bees Excalibur II, an adventurous thrill creeps through me – I’m going on a night dive, and it’s been ages.

When was the last time you went night diving? For most of us it was probably part of our advance diver training, and maybe we gave it a go one or two more times – then it was off the slate.

We don’t even notice that we’ve logged 20 dives, 40 dives, 150 plus dives and they all have been during the day. The essence of diving is exploration, whether exploring Kata Reef at eight meters, in hopes of finding the elusive mimic octopus that is rumored there, or searching the Krabi coastline for new underwater cave systems. But the vast majority of us halt our explorations at sunset, the very moment an entirely different world is exposed.

Many of us on the boat had already booked three dives for the day, as part of the Super Sunday package, so the plan for the night dive was to stay shallow, around 15 meters for about 45 minutes – I was stoked.

As we are suiting up my dive buddy continues to whistle the 1993 Corona classic, “This is the rhythm of the night”. An acoustic remake of the song had been playing on the top deck as we reviewed signals for night dives as part of our briefing.

It’s dusk, and everything deepens into a dark blue, as if we were already 30 meters down when we jump.

The light quickly fades as we drop down. Elusive critters that stay holed up during the day are heading out, on the hunt.

Night diving is all about one thing at a time. My torch spotlights a single half meter off the massive wall. Directly around me everything is black, no distractions. Several meters in either direction the lights from other torches bob up and down the wall, the invisible figures behind them searching for sea life.

In front of me, the thick stubby groves of orange and green cup coral are in “bloom”, their tiny tentacles covered with nematocyst cells are outstretched, like the limbs of a Dr Seuss shrubbery. This spectacular and common coral species, vibrant at night, is usually only noticed during the day at the edge of underwater caves.

Even the feather stars, so often rolled up tight, hanging onto crinoids, or sea fans, were open and putting on a burlesque show.

Despite the beauty of the corals, which seem to have a radioactive glow to them under our lights, the crustacean crowd wasn’t to be out done. I examine a single small colony of corals – hiding within are four or five different species of shrimp, crab and lobster: striped and dubam hinge-beak shrimp, squat lobster and conical spider crab.

Just up current from me one of the divers in our group, having gotten my attention, is circling a spot on the wall with his torch. I fin back to him. There, in a tiny bed of sand piled into part of the wall is the tiniest scorpion fish – hardly bigger than my thumb nail.

After our safety stop, Andrea Filippozzi, our instructor, puts his light against his chest and we do the same with ours.

It goes dark. Then we move, and the water bursts into color, like a hundred microscopic fireflies have just jumped from our arms.

My smile is so big that a little water starts to leak into my mask. I remember the fist time I played with phosphorescence – I felt like Peter Pan shaking Tinker Bell – and still do.

Arms crossed and thumbs up, we close a stunning dive, and I make a quick vow not to let so much time pass before I make another date with the dark side, and once again feel the rhythm of the night.