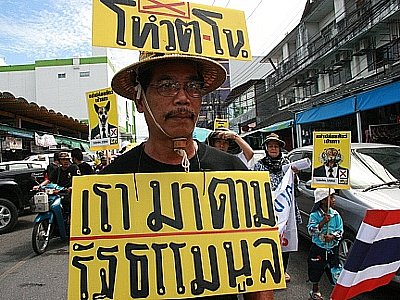 PHUKET: A band of about 30 protesters took to the streets of Phuket Town this afternoon to support their call for people to “vote no” in Thailand’s upcoming July 3 general election.

Starting from Queen Sirikit Park on Thalang Road in the heart of Old Phuket Town, the protesters made their way past the Clock Tower Circle in front of The Metropole hotel to the Robinson department store, where they boarded vehicles to take them to their rally site at Saphan Hin.

Accompanying the protesters were sound trucks plastered with the controversial signs depicting politicians as animals of “distaste”.

The trucks also played messages calling for voters to choose “None of the above” on the July 3 ballots.

During the march, protesters handed out pamphlets explaining their reasons for urging Phuket people to “vote no”.

Khamnueng Khamwiset, a 63-year-old Phuket native, told the Phuket Gazette, “Governments have caused a lot of damage to our country – and that must stop. No parties running in the upcoming election are good enough.

“They do not have any policies that will help the country. They should at least have a policy for resolving the problem with Preah Vihear Temple [on the Cambodian border],” he added.

“The current state of politics in Thailand is rubbish. We cannot trust anybody. Sixty years of having elections has done little to improve our country,” he said.

“We want political reform – and politicians do not need to be a member of any party in order to be able to stand for election,” he added.

However, not all onlookers welcomed the protest.

As the protesters moved on from the food market beside Robinson’s, one young motorbike taxi driver shouted out at them, “Who will run the country if we all vote no? It’s such nonsense!”