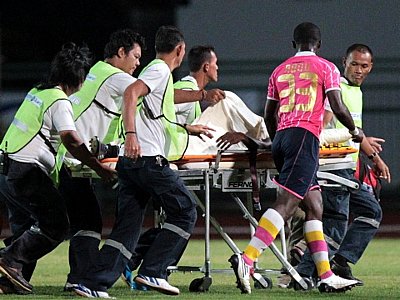 Kick-off will be at 6pm.

All eyes will be on Coach Sompong, whose first outing was a 1-1 draw on the road at Air Force United last weekend.

He has reportedly given himself just three games to turn around the team, who fell to ninth in the table, albeit with one game in hand.

Coach Sompong told the Thai press in a pre-game interview that his side would play disciplined football tonight.

He expects no less than a draw against the high-flying Hornbills, currently perched in fourth place of the 18-team Division 1.

Phuket were top of the table early in the campaign, but the failure to win any road games made a segment of hardcore FC Phuket supporters increasingly frustrated with the leadership of Coach Sompong’s predecessor, Surachai Jirasirichote.

When Phuket was outclassed at home in a 0-3 loss to Buriram two weeks ago, their second successive home loss, frustration turned to fury.

Coach Surachai was forced to resign amid venomous screams of Awk Pai! (“Get out!”) by a group of fans who may have been further incensed because their normal seating area had been claimed by the orange-shirted supporters of Buriram FC, who put on a performance Kim Jong-Il could have been proud of.

It will be an emotional game for FC Phuket tonight, as the last time the two sides met in the promotion playoffs in October, FC Phuket’s Camara Ahmed went into cardiac arrest on the pitch.

His life was saved due to fast action by Bangkok Hospital Phuket medical staff, but his playing days are over.

One Chainat FC player to watch out for is Phuwadol “Dummy” Suwannachat, who despite the unfortunate nickname is no nincompoop with the football.

He is tied with Romain Gasmi of Bangkok United as Division 1’s top scorer, with 11 goals.

Tickets to tonight’s match are 50 baht for adults and 20 baht for kids. Fans wanting good seats are advised to arrive early.

The match two weeks ago drew a record crowd of over 8,000 people.

The team’s management would like to see a similar figure tonight, but the weather could interfere.

The forecast by the Meteorological Department for the 24-hour period starting at noon today forecasts scattered rain covering 60 per cent of Phuket.