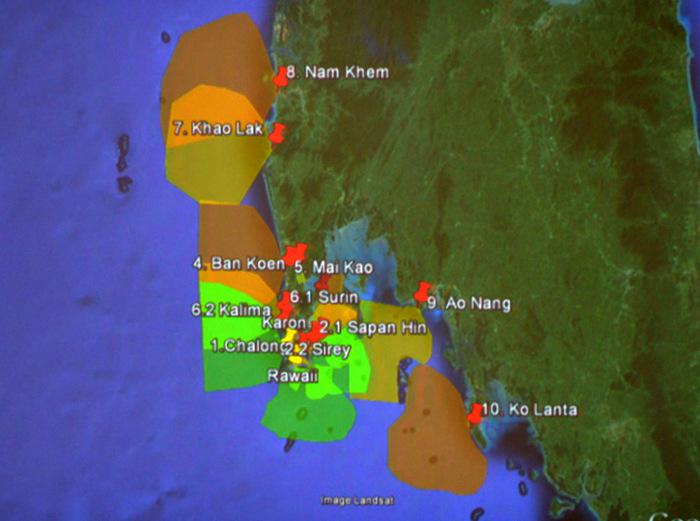 PHUKET: Two years behind schedule and 70 million baht in the making, Phuket’s long-awaited one-stop yacht center will open with a two-week trial period, starting on Monday.

“Officers involved in yacht-arrival services, such as immigration, customs and the harbor master, are now moving into their new offices,” Phuket Marine Chief Phuripat Theerakulpisut told the Phuket Gazette.

The rotunda-style building at the end of Chalong Pier, originally slated for completion in 2012 (story here), has an administration room, immigration office, customs office, plant and animal quarantine area and an office for Phuket Marine officials, he noted.

All yachts entering Phuket waters must report to the one-stop center and register on a GPS locator system that cost 15mn baht to set up (story here).

Yachts will be tracked by the Automatic Identification System (AIS). The control center for the system is at the one-stop center, and relay towers have been installed in Karon, Rawai and at the Phuket Deep Sea Port at Cape Panwa.

“Yachts arriving in Phuket will have to log in to this system so we can track the whereabouts of each vessel,” said Mr Phuriphat.

“Ten more relay towers will be installed within the next three months; six throughout Phuket and two in Krabi and two in Phang Nga.”

Phuket Governor Maitri Inthusut hopes that the one-stop yacht center will raise yachting standards in Phuket and benefit the island as part of the future Asean Economic Community (AEC), which comes into effect next year.

“Chalong Pier is the gateway to various destinations in Southeast Asia. When the one-stop service center is officially open, it will make Phuket a more attractive place for international yachting,” Governor Maitri said.

“It will also be beneficial for Phuket as an integral part of the AEC.”

All yachts entering Phuket waters must report to the one-stop center and register on a GPS locator system that cost 15 million baht to set up. Video: PGTV