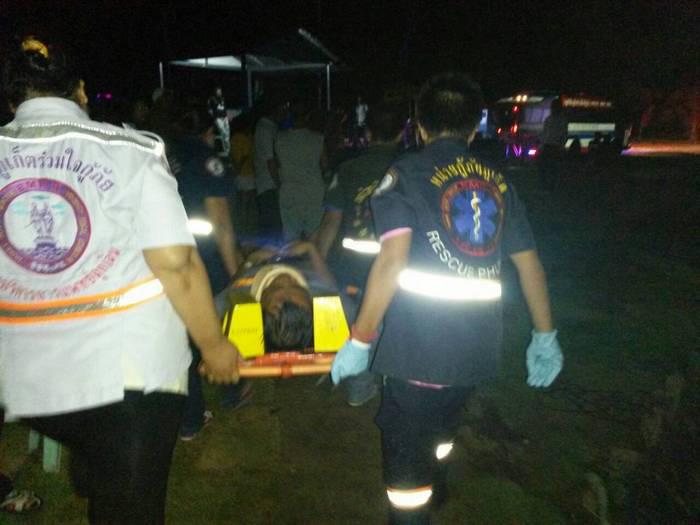 PHUKET: Two men died and one was seriously injured in a Phuket bungy-jump test last night after the lift they were on crashed to the ground.

The owner, Tossaporn Suksri, 27, and his mechanic Pitakchai Wongsricha, 30, were waiting in the lift for their turn to test the jump when a malfunction caused the platform they were standing on to free fall from 52 meters, explained Capt Kraisorn Boonprasop of the Chalong Police.

“Mr Tossaporn and Mr Pitakchai were unable to get over the rail in time to jump into the water below,” said Capt Kraisorn.

Anupong Kantawong, 37, had jumped before the malfunction. However, the bungy cord attached to his feet was anchored to the bottom of the lift. He was seriously injured after slamming into the water.

Mr Anupong was rushed from the site, near Soi Guan Yu shrine in Chalong, to Vachira Phuket Hospital.

“We will question Mr Anupong as soon as possible,” said Capt Kraisorn. *

Mr Anupong is in the Intensive Care Unit, a Vachira Hospital nurse told the Phuket Gazette this morning.

The bungy jump was set to open to the general public sometime this month, after it was established that it was safe.

*The original story misquoted Capt Kraisorn as citing a lifting-drum malfunction as the cause of the accident. The error is regretted.