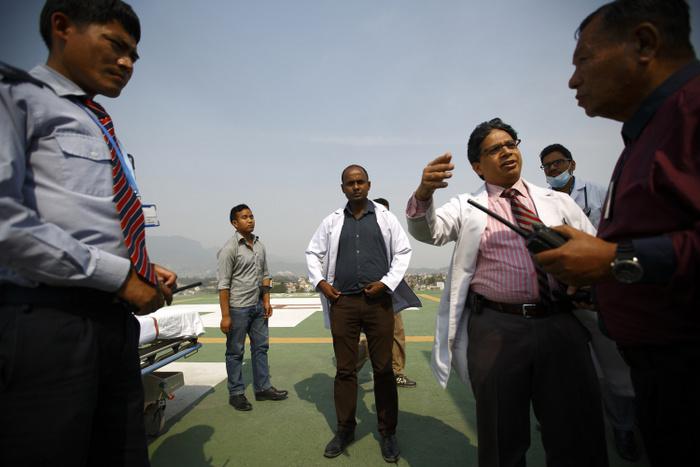 PHUKET: An avalanche sweeping down Mount Everest killed at least 12 Nepali guides on Friday in what may be the deadliest single incident on the world’s highest peak.

The avalanche struck a perilous passage on the main route to the summit as sherpas were preparing the way for climbers at the start of the season. Nepal’s tourism ministry listed the 12 dead and four others missing, presumed buried in the snowslide.

Scottish film maker Ed Wardle put the death toll at 16 – including five from his own party – with more badly injured.

“One of the most horrific sites I ever saw on Everest was seeing the bodies being airlifted on long lines below the helicopters,” he told Britain’s Channel 4 News.

It was Everest’s first major avalanche of this year’s climbing season, when hundreds of foreign and Nepali climbers will attempt to reach its 8,848-metre peak.

The Himalayan Guides, a Nepali hiking group, said six of its sherpas had gone ahead of climbers they were accompanying in order to fix ropes and crack snow and ice to carve out a route, when they were caught in the avalanche and died.

“They were very strong and skilled climbers. It is a natural disaster and no one could do anything about it,” Ishwari Paudel, the owner of the company, said in Kathmandu. The other victims were working for other mountaineering parties.

More than 4,000 climbers have scaled Everest’s summit since it was first climbed by Sir Edmund Hillary and Tenzing Norgay Sherpa in 1953. The route they took along the South Col was the one hit by the avalanche on Friday.

The search for the missing was called off for the night and will resume on Saturday, Lakpa Sherpa of the Himalayan Rescue Association told Reuters from Base Camp.

“The atmosphere at Base Camp is now of shock and of grieving,” film maker Wardle told Channel 4, adding that “many of the expeditions here will pack up and go home.”

“For this number of people to die at the very beginning of the season is completely unacceptable. We came here looking for adventure, to celebrate Everest, but for something like this to happen makes the whole thing seem pointless.”

The avalanche that hit at around 6:30 a.m. left dozens of other climbers who had reached more advanced camps on the mountain unable to return to Base Camp, mountaineer and blogger Alan Arnette wrote from the scene.

“An estimated 100 sherpas or Westerners were estimated to be above the impact area and are cut off from returning to Base Camp until a new route can be put in,” Arnette wrote, adding that this could take days.

The avalanche struck at the Khumbu Icefall, a treacherous passage between Base Camp and Camp 1 riddled with crevasses and columns of ice known as seracs, Adrian Ballinger of California-based Alpenglow Expeditions told Reuters.

“In many ways it’s always the most dangerous part of the mountain to climb, because the ice is constantly moving, there’s so many crevasses and seracs where you need to use ladders and ropes to get through the very technical terrain,” he said.

Above stands a feature called the West Shoulder that can shed avalanches on a “pretty regular basis”, said Ballinger.

“Whenever we’re in it, and whenever anyone’s in it, we’re very conscious of moving as quickly and as efficiently as possible because there is this sort of uncontrolled risk.”

A travel blog for 67-year-old Ed Marzec, a Californian attempting to become the oldest American to climb Everest, reported that he was among tourists preparing to set out when the avalanche happened.

“We’ve just heard from Ed. He is safe and sound at Base Camp,” said the update.

“Asha, a sherpa on Ed’s team, has been lost in the avalanche,” the update continued. “He was a member of the pioneering Sherpa group who went up to first camp to set ropes. He has a wife and two young children, ages one and three.”

The tourism ministry said it would make payments of $400 to the families of each of the victims to cover funeral costs.

Nearly 250 people have died on Everest, which is on the border between Nepal and the Chinese region of Tibet.

A rising number of tourists has raised concerns about safety and environmental damage, although Nepal still plans next year to cut fees for those wishing to do the trek.

The government has issued permits to 334 foreign climbers this season, up from 328 for the whole of last year. An equal number of guides also climb to help the foreign mountaineers.

Overcrowding is a problem near the summit, where climbers wait their turn to scale or descend a steep rock formation called the Hillary Step, but Paudel of the Himalayan Guides said of the accident: “It had nothing to do with the overcrowding.”

Authorities are installing two ropes – one to go up and one to come down – in an effort to ease congestion at the Hillary Step, located in Everest’s “death zone” because of its thin air.

The climbing season usually ends in late May when rainy season winds and clouds push up from the south to cloak the Himalayas, making high altitude climbing virtually impossible.