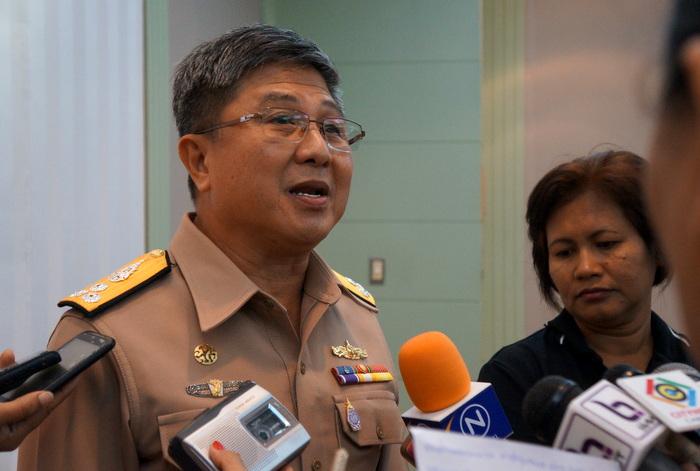 PHUKET: A Royal Thai Navy Vice Admiral criticized local officials’ management of tourism in the Andaman at a meeting held on Wednesday.

Royal Thai Navy Third Area Commander Sayan Prasongsamrej was particularly critical of the Phuket Marine Office, saying that officials there needed to do a better job of documenting international vessels anchoring or docking in Thai waters.

“A major concern of mine is that we’re not controlling yachts from other countries coming into our region, especially those coming to Phuket,” V/Adm Sayan said during the conference.

“I was told that Phuket has a yacht control center and assured that they have a good system in place already, but I doubt that because it’s much harder to monitor traffic at sea than on land or air.

“I want to urge every officer to ensure that they do their job correctly. The more we record tourist and yacht-related data, the better we will be able to control and document who comes in or out of our territory.”

Officials from tourist management departments throughout the region discussed the possibility of limiting the number of tourists visiting islands and other fragile habitats, in order to preserve the Kingdom’s natural resources.

V/Adm Sayan told the Phuket Gazette that the meeting was called so he could get a better idea of what problems tourist departments in the region were facing and to ensure that tourist areas are preserved.

“One of my suggestions was to have a maximum of 200 tourists at the same time on Ta Chai island,” he said. “Controllers at the pier would make sure of this.”

Ta Chai Island and the surrounding waters were closed to tourists and members of the public on May 16 with no scheduled reopening date (story here).

“In the meantime, we have yet to get a clear picture of when the island will reopen,” said V/Adm Sayan.

The Vice Admiral’s proposal dates back to September last year, when he first raised the idea of controlling the number of visitors to the Andaman region’s tourist attractions, including Phi Phi Don, in order to promote environmental sustainability (story here).

There is no clear indication of when – or if – the vice admiral’s proposal will be adopted.

“Marine officers are sorting out details of the plan, but I want to see a clear picture on controlling the number of tourists. Moreover, I want to see how they’ll make sure that all tourists come back to shore safely and for them to have records of when tourists and boats leave for the islands,” V/Adm Sayan said.

“When tourists spend the night at one of the islands, officers must have a record of where they’re staying.

“Although we cannot directly command every tourism office in the region to implement these measures, we can call them in to discuss their progress and have them update us to make sure we are on the same page.”