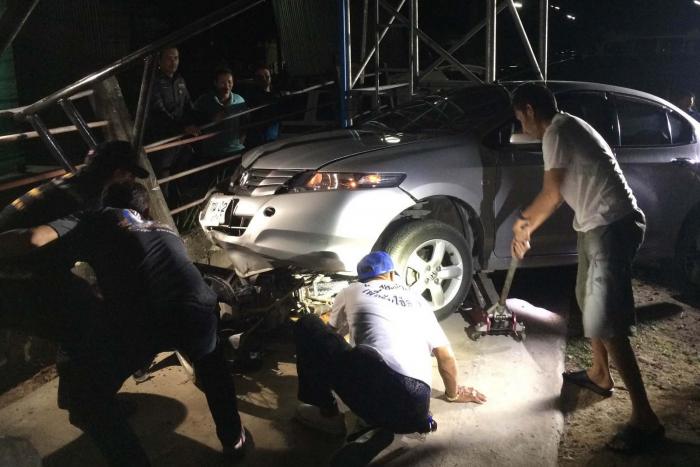 PHUKET: A Muslim cleric was injured in a drive-by shooting in Koh Kaew last night, after which he attempted to chase down his attackers, seriously injuring both.

Weerachat Kahapana, 49, an Imam at Bang Pae mosque, received one bullet wound in his rib-cage, while his 3-year-old son, who was in the car with him, escaped unscathed.

The perpetrators were seriously injured as Mr Weerachat reportedly tried to run them over in the aftermath of the shooting.

“We received reports of the shooting at 7:45pm and rushed to the scene with Phuket City Police officers,” said Phuket Provincial Police Deputy Commander Peerayuth Karajedee. “Mr Weerachat’s car, sprayed with multiple bullet holes on the passenger seat glass, was parked there with a damaged motorbike stuck under the front. Two helmets, a mobile phone and footwear were also lying nearby.”

“Mr Weerachat had already been taken to Vachira Phuket Hospital by the time we arrived, while witnesses claimed to have seen the two shooters escape to a nearby forest,” he added.

Witnesses told the police that Mr Weerachat and his son left their house to attend evening prayers at the Bang Pae mosque, when the two men on a motorbike pulled up and shot at his car.

A short chase ensued, which led to Mr Weerachat attempting to run over the shooters with his car. The two managed to flee on foot. Mr Weerachat and his son were both taken to the hospital.

It was also reported that the attackers later stole a motorbike to get away from the scene.

“With the help of CCTV footage and witnesses’ accounts, we found that the shooters ended up at Vachira Phuket Hospital at about midnight,” said Col Peerayuth. “They had been transferred there from Thalang Hospital due to the severity of their injuries.”

When being questioned by the police, the suspects denied any involvement in the shooting. However, police are closely monitoring them while they receive treatment at the hospital.

Mr Weerachat has reportedly been threatened once before, at his house.

Shrimp spillage on slippery road leads to acts of kindness