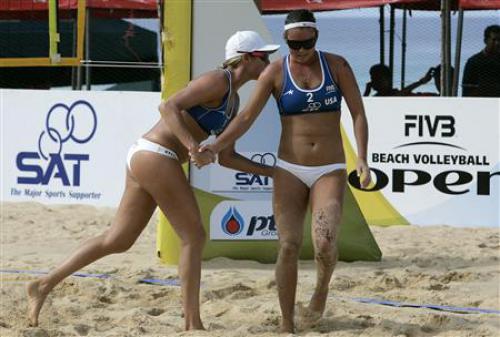 PHUKET: USA’s Jennifer Kessy and Brooke Sweat top Pool G after securing two wins on the first day of pool play at the 2013 FIVB Beach Volleyball Phuket Open yesterday. The penultimate Open of the year is back in Thailand for its eighth consecutive year, taking place from October 28 to November 3.

Kessy/Sweat were first on court at 9:00 in Phuket with temperatures already up to 30°C. In their first outing together, the US team quickly found their feet, beating Melinda Adelin and Laura Longuet from France 2-0(21-8, 21-13).

“This morning was a good first match for us. This is our first tournament playing together and we haven’t had a lot of practice together, so we were just figuring things out in that match and came away with the win,” said Sweat.

Kessy/Sweat then played strong qualifiers Teresa Mersmann and Isabel Schneider (GER) on center court in the heat of the day. Germany surprised the US pair, pushing the first set all the way, but Kessy/Sweat finally closed it 26-24. The German pair began to struggle in their third match of the tournament and reluctantly forfeited the match at 10-4.

“It’s always tough to play a team you’ve never seen before, you’ve never played before and they did really well. They had really good ball control, good defence, good serving so I think we got a little bit behind in the first set and then battled back to win 26-24. Luckily we won that game and then I think the heat just got to the German’s and they forfeited so we’re really happy to come out with a win,” said Kessy.

Kessy pairs up with Sweat for the first time in Phuket, despite appearing in the tournament over multiple years winning gold twice and silver once here before with April Ross.

“As long as the tournament has been going I have been coming here. I hadn’t played a lot this year and I saw that Brooke needed a partner for this tournament and I thought absolutely, so I was so excited to come back,” said Kessy.

April Ross enters Phuket with Jennifer Fopma as Kessy plans to spend more time with her family over the coming years, but Brooke still has the pleasure of playing with Kessy in Thailand.

“It’s an honor to play with Jennifer, she’s been playing since I started watching her and following her so to play with an Olympic silver medalist, I never thought I would. It’s amazing,” said Brooke.

Italy’s Marta Menegatti and Viktoria Orsi Toth had a tough first match in Phuket facing Vasiliki Arvaniti and Panagiota Karagkouni from Greece. The first set went according to plan for the Italian’s winning 21-13, but the Greek pair came out strong in the second.

Arvaniti/Karagkouni first took the edge at 8-7 and from there it was a battle for the lead. A number of long points midway through began to produce errors, but Greece confidently smashed home the last two points taking the set 23-21.

“We feel great, it was the first match and it was so difficult I think, with this weather. We complicated our life because we would like to have won, two sets to zero, but maybe the weather, it’s too hot. But it’s OK like this, important is to win,” said Menegatti.

We have played together for about three months and we fit each other well. We are the same age. I think our strength is that we are very ambitious and we are together on the court and outside, so we are fine together.”

Menegatti/Orsi Toth end the day just behind Evgenia Ukolova and Maria Prokopeva in Pool G and both pairs play their last two pool matches on Thursday in Phuket.

Thailand’s favorites Varapatsorn Radarong and Tanarattha Udomchavee are still on track, topping Pool A at the end of the first day in the main draw. The Thai girls beat Svitlana Baburina and Diana Mulenko (UKR) 2-0 (21-8, 21-14) and then awarded their second match due to injury of Polish team Monika Brzostek and Kinga Kolosinska.