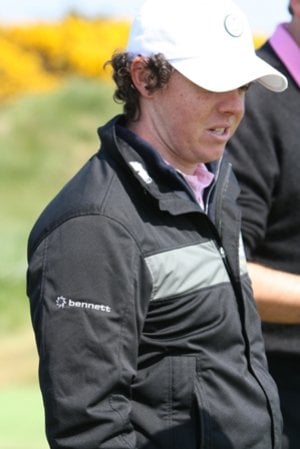 The 22-year-old from the small town of Hollywood, County Down, entered the record books as the youngest player to win the title since Bobby Jones in 1923.

But McIlroy etched his name in history in more ways than one.

His second round total of 131 strokes, which left him at 11 under par, is now the lowest score over 36 holes in the 111-year history of the US Open.

At 13 under par, McIlroy broke the previous record of 12 under par previously set by Tiger Woods and Gil Morgan scored at Pebble Beach in 2009.

And now he also holds the record for the best score after 56 holes, reaching 14 under with 199 strokes.

On the final day of play, McIlroy sealed his win with a 16 under par total, a record-breaking 268 strokes for the tournament – yes – another record.

McIlroy’s father Gerry, who worked three jobs to help support his son’s golfing ambitions, hugged his son on the 18th green after the landmark win – a Father’s Day present to be treasured.

“We wanted to give our child a chance – after all, he is the only one we have. But I want to make it clear: golf was not our dream, it was Rory’s,” Gerry said in an interview last year.

Although Gerry didn’t see his son slump to lose a four-shot lead in the Master’s in April, he will no doubt be glad he didn’t miss out this time.

It is clear from the fans treatment of McIroy over the four-day tournament that he holds a special place in their hearts.

His US Open win brings McIlory his first major title, but pundits and fans alike are singing in unison that this will not be the last.

Move over Tiger, the dawn of Rory McIlory is here.