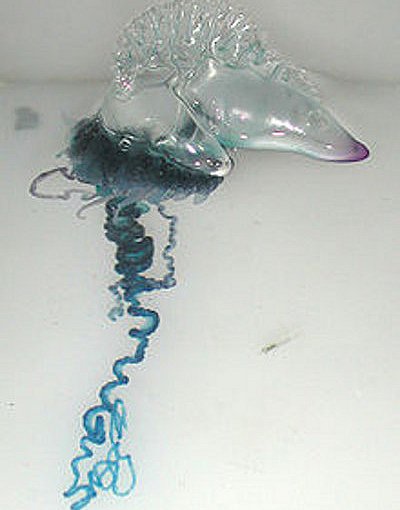 PHUKET: As if monsoon-season rip currents weren’t bad enough, the head of the island’s lifeguard association is warning the public of a new threat lurking in the Phuket surf: the dreaded bluebottle “jellyfish”.

Vitanya Chuayuan, publicity officer of the Phuket Lifeguard Club, said two of the pseudo-jellies were spotted at Nai Thon Beach on Wednesday.

Over the weekend there were numerous reports of the potentially deadly invertebrates at Nai Harn and Nai Thon beaches.

Bluebottles can be identified by an air-filled sac up to 100mm in diameter, from which hangs a single, blue tentacle that can reach up to 10 meters in length when fully extended.

Also known as the Portuguese Man o’ War (Physalia physalis), the bluebottle is not a true jellyfish but a siphonophore. These differ from jellyfish in that they are not a single creature, but a colony of minute individuals called zooids.

Biology aside, anyone who suffers a sting from one will not soon forget it. Signs and symptoms include searing pain, usually with a single raised white weal with prominent beading effect. Multiple weals may occur with mass stinging.

“Our lifeguards are now warning all tourists to be aware of bluebottles. In the event of a sting, we will wash off any remaining tentacles with seawater then treat affected areas,” she said.

As of this morning, there had been additional reports of the creatures at Surin Beach and a few more at Kata Beach.

40,000 voters in Phuket sign up to cast ballots for other provinces

US Open a father’s day gift from McIlroy