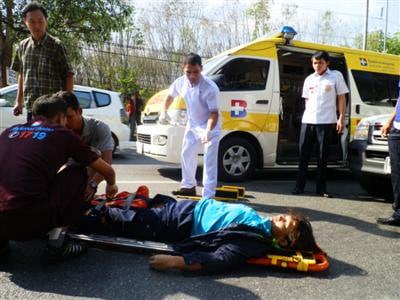 PHUKET: A Phuket Airport employee returning home from work was seriously injured when her motorbike was hit by a passenger van full of tourists returning from a trip to Phang Nga yesterday afternoon.

Thalang Police were notified of the accident at 3:35pm.

Arriving at the scene, the turnoff to the airport on Thepkrasattri Road, police found 48-year-old Lamphong Losing lying on the pavement, bleeding profusely from her right foot and mumbling incoherently.

She was hit by a white passenger van that was traveling southbound on Thepkrasattri Road when it collided with her motorbike.

A rescue worker described her injuries as “severe” and said she would likely be transferred to the better equipped Vachira Phuket Hospital in Phuket Town.

“It would have been a lot worse if she hadn’t been wearing a crash helmet,” the rescue worker said.

“It is a three-way junction with a red light, so whichever party failed to observe the signal must have been at fault,” he added.

None of the 12 passengers in the van were injured.

Thalang Police duty officer Patiwat Yodkwan said the driver did not flee the scene and was scheduled to come in for questioning on Tuesday.

In another road accident in Phuket last night, a white Toyota Vios slammed full force into a power pole in front of the Hino dealership on the bypass road southbound just after midnight.

A passerby told the Gazette that the driver, a man who appeared to be in his 40s, was rushed by rescue workers to Vachira Phuket Hospital.

The accident was reported to police at about 12:15am.

The condition of the unconscious driver, who was the only person in the car at the time, was described as “serious”.

The Phuket-registered Vios was badly damaged and the light pole will need to be replaced, the witness told the Gazette.