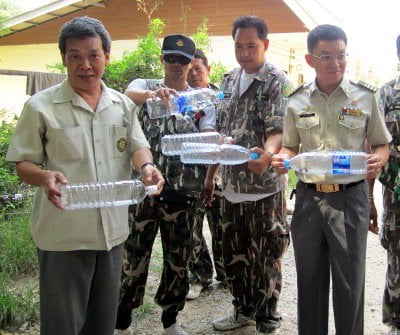 PHUKET: A team of officers from Phuket’s Khao Phra Thaeo Wildlife Sanctuary in Thalang today collected 10 different types of spiders from around the home of Wanchai Wonglakorn, who died on Monday of a suspected spider bite.

The officers, led by Awat Nitikul, chief of the Environmental Conservation Division unit based at Khao Phra Thaeo, rummaged through the undergrowth around the home in Mai Khao.

His orders to sweep through a 100-meter radius of the home for any potentially dangerous spiders came from the top – Damrong Phidetch, chief of the Department of National Park Wildlife and Plant Conservation.

Any spiders found are to be used as samples to compare with the findings of the Institute of Forensic Medicine at Police General Hospital in Bangkok, which has been assigned to conduct an autopsy to determine the cause of Mr Wanchai’s death, Chief Awat said.

“Today we collected more than 10 different kinds of spiders. We will be back tomorrow in the evening and on Saturday night to collect more spiders,” he said.

“The staggering of collection times is being done in hopes of catching a broader range of spiders, including the brown widow spider, which at this time we assume killed Mr Wanchai,” Mr Awat said.

Any spiders collected will be sent to an entomologist for analysis, he added.

“According to official research, brown widow spiders have been found in Amphawa and in Sumut Sakhon province, but none have ever been reported in Phuket,” he said.

“Its venom is stronger than that of a cobra,” he added.

However, Mr Awat said it was possible for a brown widow to have arrived via one of Phuket’s ports.

The search today followed a sweep of the inside of the house yesterday by provincial health officials, which netted two house spiders.

“We have yet to determine the cause of death. We have to wait for the autopsy report from Police General Hospital in Bangkok,” said Phuket Public Health Office Deputy Director Wiwat Seetamanotch.

“It is possible Wanchai had an underlying disease. I talked to the three doctors who examined him before he died. They all said they saw no wounds that looked like a spider bite and none of his symptoms before he died were consistent with being bitten by a spider,” said Dr Wiwat.

“The doctor who conducted a blood test on the morning before [Mr Wanchai] died also found nothing unusual in his blood. I have been told that Wanchai was drinking a lot of alcohol due to the Chinese New Year celebrations and that he had been drinking a bottle of Thai whiskey a day for awhile,” he said.

“One doctor said he smelled alcohol on him when Wanchai was in the hospital. This could possibly be a factor in the cause of his death,” said Dr Wiwat.

“Anyway, all we can do is wait for the autopsy report,” he said.

“We have never had any reports of black or brown widow spiders in Phuket, so there is no need to panic,” he added.

However, one of Wanchai’s neighbors, Kittisak Lomsongnern, 24, told the Gazette, “He was drinking with me on the day he was bitten. He went to take a shower and came back afterwards to keep drinking with us.

“He told us his arm was sore and that he had no idea what bit him. Then he could not stand the pain, so he went to see a doctor. The next day I was told he was dead,” he added.

“I went to the hospital to see the body. I swear that I saw two little white spots on the inside of his [upper] right arm, and I am standing by it,” said Mr Kittisak.

Two rushed to hospital after separate accidents in Phuket