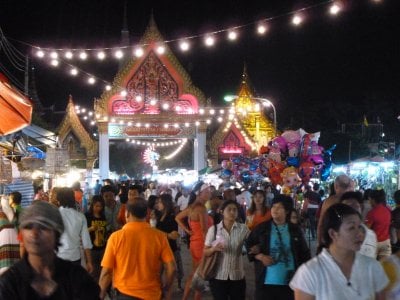 PHUKET: Despite traffic chaos, Phuket residents have been flocking to the annual Chalong Temple Fair that runs through to Sunday.

The vibrant fair each year attracts thousands of visitors who come to sample the wide range of food, browse the market stalls and enjoy the variety of activities on offer.

Besides the many famous singers and celebrities taking turns on stage, the fair also gives people the opportunity to pay respects before an image of revered monk Luangpor Chaem and pray for good fortune this year.

Chalong Police Deputy Superintendent Narong Laksanawimon told the Phuket Gazette his traffic division is working hard to deal with congestion in the area.

“I have assigned many of our traffic police officers to the fair. Traffic in the area is already bad, even without the fair. It starts to get really jammed from about 4 to 5pm onwards,” said Lt Col Narong.

“Parking can be a big problem for anyone arriving by car. Free parking spaces provided by the temple fill up quickly, but there are some private businesses and local residents that provide extra parking spaces for a fee,” he said.

“We’re also concerned for the safety of people who come to the temple fair, that’s why we have police, Navy officers and volunteers to help us,” he said.

There have been no fights or other serious problems reported so far this year, he added.

The fair has not been without incident in the past. Last year a 14-year-old girl was reported missing by a family of fairground attraction operators. She was later found at another fairground in Haad Yai and reunited with her family.

During the 2006 installment, the corpse of a newborn baby was discovered in a water tank in a toilet at the fair.

Two rushed to hospital after separate accidents in Phuket