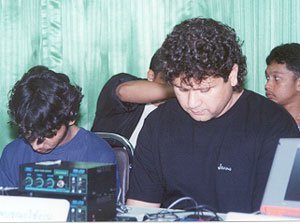 PHUKET TOWN: Police have arrested a Briton and his Burmese partner and accused them of an international mobile telephone scam that was netting them thousands of baht each day. Police named the men as Gaser Jaba, 35, and Lux Chuman, 18. The pair were arrested at a house in Moo Baan Jom Thong on Kwang Rd yesterday afternoon. Police confiscated 13 mobile phones, bank books, nine notebooks full of telephone numbers, computer equipment and an Isuzu car. Both have been charged with illegally entering Thailand, with fraud and with illegally possessing, making, and using telecommunication devices. Police said the men accepted their guilt. The men allegedly used two mobile handsets and computer equipment that could tap in to the frequency of a legitimate mobile phone subscriber. They would use one phone to call a Burmese camp in Malaysia, and ask the person at the other end who they wanted to talk with in Burma. Then they would use the second mobile phone to call that person in Burma, connecting the signals from the two mobiles so that the person in Malaysia could talk to the person in Burma. Legitimate subscribers of the phone numbers used in the operation would later find hefty long-distance charges billed to their accounts. The men allegedly had a contact in Malaysia or Burma who accepted fees for the “service” on their behalf, and the money would be transferred to bank accounts. The operation was bringing in about 50,000 baht a day, police said. Phuket Provincial Police Commander, Pol Maj Gen Kongphol Suwannaraks, has asked locals to keep an eye on foreigners in Phuket. “There are many foreigners coming here and some of them stay and engage in illegal activities,” he said. “People can help police by observing what these foreigners do and report any sign of illegal activities.”