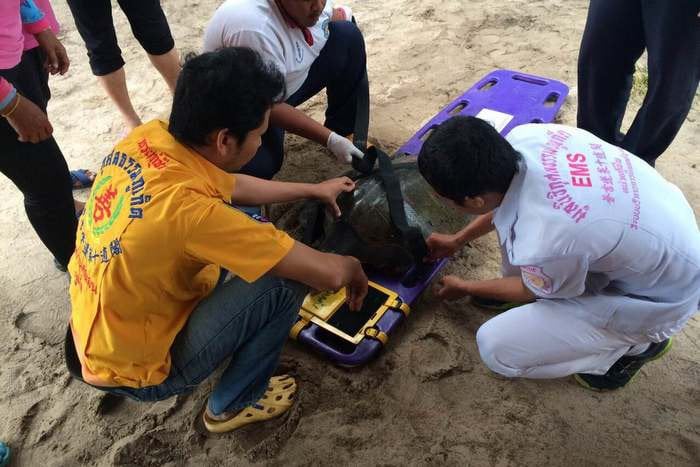 Officers from the Phuket Marine Biological Center (PMBC) and rescue workers from the Kusoldharm Foundation went to the scene at about 7pm after being notified of the turtle by a beach guard.

“The front left flipper was severed. We believe the turtle had been caught in a fishing net,” said Dr Rachawadee Jantra of the PMBC.

“We gave it antibiotics on the spot, as well as a salt-water injection, before it was taken to the PMBC.”

Dr Rachawadee explained that the turtle is a male and about 10 years old, the prime reproductive age for turtles of this kind.

“It is rare to find a male, reproductive age turtle washed ashore. We usually find females,” she said.

“Normally, there are more female [about 10] than male [only three or four] hatchlings per clutch [of eggs].”

Dr Rachawadee added that she believes the PMBC will keep the turtle at the center.

“We do not think this turtle can survive in the wild without his flipper, so we will keep him here as a breeder,” she said.

She also urged all local fishermen to free trapped turtles from nets to prevent similar injuries.

“Some fishermen just release the turtle without completely removing the net from its body. We need all fishermen to make sure they remove the net before they free the animal,” she added.