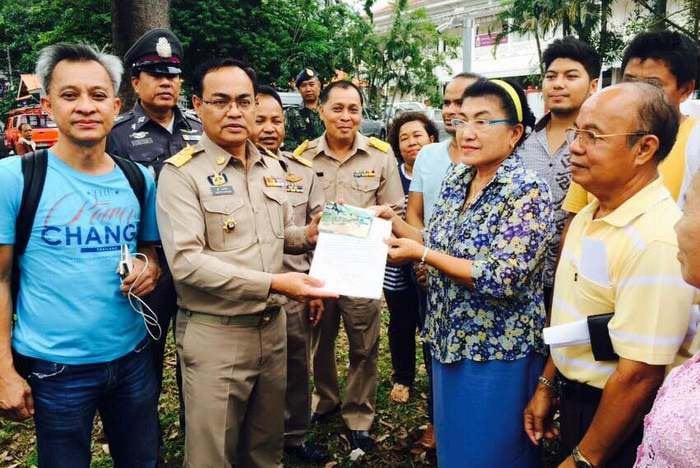 The villagers argued that the construction has narrowed a local road, thus substantially increasing traffic congestion and accident risks.

“We knew that this is a Rassada Municipality project and we fully cooperated the first 500 meters. However, lately we have noticed that the pipeline’s direction has changed and it now overlaps and narrows the road, increasing traffic congestion,” said Vanida Ninmouy, a representative of the residents.

“We have already spoken to the municipality, but the officials said the pipeline could not be laid in a straight line because it would cross over private land. However, from what we know, the plot in question is old public land, not private.”

For this reason, the residents urged the municipality to check the title deed of the land.

“The residents never got an answer and the project continued on,” Ms Vanida added.

“We found that the pipeline had indeed overlapped the road and that there were no warning signs in the area. The road was also very dirty,” said Mr Prapan.

“As a temporary measure we asked the construction company to put up warning lights and clean the road to prevent accidents.”

The officials also agreed to set up a committee to investigate the issue.

“For the long term, we will set up a committee with representatives from the Damrongtham Center, Rassada Municipality, Public Works and Town and Country Planning Office and other relevant officials to find out what exactly has happened,” he added.