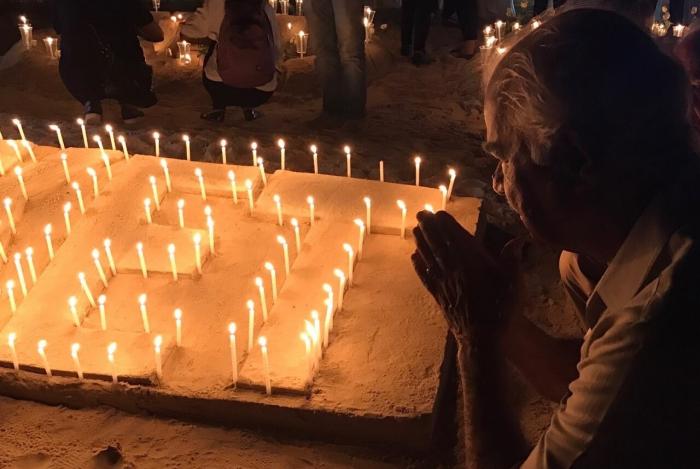 PHUKET: About 200 locals, tourists and provincial dignitaries gathered at Patong Beach yesterday evening to hold a candle-lit remembrance ceremony in front of Loma Park on the 12th anniversary of the deadly tsunami that struck the island on the morning of December 26, 2004.

Official figures state that the tsunami killed 5,398 people and that more than 3,700 disappeared in the waves that struck Phuket and the Andaman coast twelve years ago.

The ceremony, presided over by Patong Mayor Chalermluck Kebsup and Vice Governor Sanit Srivihok, began at 6:30pm with 89 seconds of silence to pay homage to Thailand’s recently departed monarch, HM King Bhumibol Adulyadej, who passed away on October 13, followed by one-minute’s silence in remembrance of the tsunami victims.

“We should take time and remember those we lost 12 years ago. We would also like everyone to know that we are prepared to handle whatever comes our way in the future, and to stand together,” said Mr Sanit.

Mayor Chalermluck echoed Mr Sanit’s sentiments, adding that a tsunami education project was underway in preparation of any future disasters.

“We will always remember the people we lost,” she said.

Microsoft aims to use IT to battle human trafficking