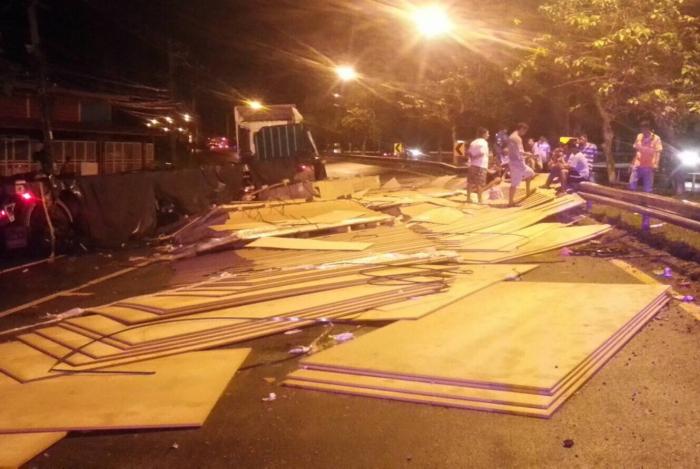 PHUKET: Tah Chat Chai Police suspect the driver of an articulated truck that spilled its load of plywood sheets all over the road last night, bringing traffic to a standstill, lost control of his vehicle when he took a sharp bend at high speed in wet conditions.

The Phuket-bound 18-wheeler spilled its entire load on the notoriously dangerous curve, a short distance from the Tah Chat Chai police checkpoint in north Phuket at 7:20pm, according to Tah Chat Chai Police Lt Sarit Buthnhongsang.

A Phang Nga rescue team, which happened to be tailing the truck, rushed the driver and passenger to Thalang Hospital before police arrived on the scene.

The spillage blocked the entire road, holding up traffic heading into Phuket for about three hours.

“It appears that the driver lost control of the truck on the slippery road. However, we have yet to confirm the exact cause of the accident,” Col Sarit admitted.