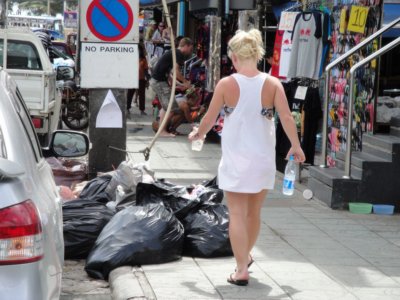 PATONG / PHUKET: The eyesore of trash in Patong, particularly Soi Bangla, has prompted a new zero-tolerance clean up policy.

A ‘clean up or pay the price’ message has been sent out to Patong businesses, with hotels, bars and restaurants coming under fire for allowing garbage to pile up outside their premises.

Patong Mayor Pian Keesin is working with Kathu Police Superintendent Grissak Songmoonnnark and his officers to enforce fines for any businesses not complying with the clean up policy.

Business owners were notified of the new policy by mail earlier this month and have been informed that they face on-the-spot fines of 2,000 baht if trash is found outside their buildings between 4pm and 2am.

The recent ‘Walking Street’ project introduced by Phuket Governor Wichai Phraisa-ngop highlighted Patong’s rubbish problem and specified that businesses must keep their trash off the streets between 6pm and 2am.

Mayor Keesin promised that the new measures will be enforced.

However, the policy has been largely ignored by local businesses.

Trash can still be found on Soi Bangla at night.

Patong Municipality’s Sanitation Department head, Pairote Tongleeparn, said the fining policy was put into action a week ago but that no one had been fined yet.

He also advised business operators to familiarize themselves with the daily trash collection times in Patong.

“Garbage trucks usually collect trash on Soi Bangla before 4pm. There are several daily collection times: before dawn, at 9am, 10am and also in the afternoon,” Mr Pairote said.

“If businesses put their trash out in time for the rubbish collection trucks to pick it up, the problems would cease,” he said.