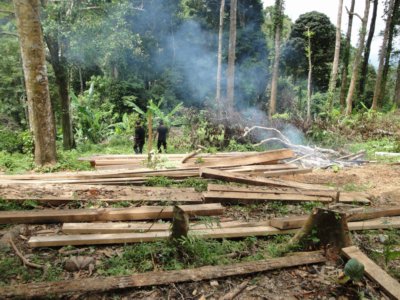 PHUKET: Illegal loggers got away with clearing a huge swathe of pristine national park forest on Kamala Hill near the west coast of Phuket for more than two weeks before officials moved in to stop them.

They found at least 18 rai of trees had been chopped down, cut into timber and taken away to be sold.

The loggers were nowhere to be seen.

Freshly cut planks of wood scattered around the area indicated that whoever was responsible had left the area in a hurry when the inspection team approached.

Phairat Limprasert, chief of the Phuket Forest Conservation Office, said the logging had been going on for at least 15 days.

“They managed to make off with more than one million baht’s worth of wood,” he said.

At least 10 cubic meters of jackfruit and sal tree wood were stolen, he said.

The site, difficult to access without four-wheel drive vehicles, is near Kalim School on Soi Barami 7 in Kamala.

A concerned citizen noticed trucks of freshly cut timber leaving the forest and alerted the authorities.