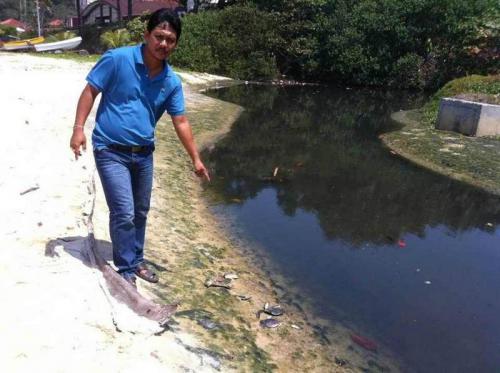 PHUKET: Locals, tourists and officials were shocked yesterday as water at one of Phuket’s most famous beaches turned rancid and black.

The stinking water flowed from Nong Han Canal across Karon Beach and into the ocean at a rate that transformed the color of the sea, Village Chief Winai Chidchiew told the Phuket Gazette.

“I went to see it myself after receiving a report from local people. It was absolutely shocking, the sea was black and there was a horrible smell,” Kamnan Winai said.

Kamnan Winai admitted that he had seen black water trickling from the canal into the ocean before, but had never seen it pouring out in such volume.

“I don’t know know what has caused this much outflow, but I think business operators in Karon dumped a lot of wastewater into the canal,” he said.

Kamnan Winai alleged that the Karon Municipality was aware of the problem, but had taken no steps to fix it.

“The problem must be fixed as soon as possible. So many tourists return to Karon because of its beauty. The more the problem is ignored the worse things will get – it will have an enormous effect on tourism for Karon.”

KaronBeach made headlines around the world three years ago when a German TV crew from a major channel found severely polluted water with high counts of coliform bacteria from human feces (story here).

Phuket Cricket: Laguna make it five in a row