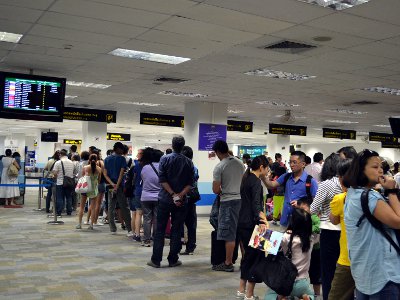 Phuket Airport has a stated total capacity of 6.5 million passengers a year, including all arrivals and departures from international and domestic flights.

Airports of Thailand (AoT), the public company that operates the facility, anticipate 7.95 million passengers this year – a 22% differential in existing capacity.

In real terms, capacity is a moving figure factoring in an estimated number of aircraft landings and departures, connecting times, boarding times and a wide range of mathematical data.

To offset capacity, flights can be delayed, waiting times extended or flights rescheduled for non-peak times, such as early morning or late evening.

Mass markets such as Russia and China have large charter flights schedules and are working on volume models. This remains a critical factor as shown in 2010 when charter flights recorded their highest historical levels and skyrocketed 153% over 2009 levels.

Expansion plans at the airport are going forward, which will see passenger throughput capacity increased to 12.5 million by 2014 with the approved project budget of US$164 million.

However, the expansion project is not scheduled to be complete for another three years. In the meantime, international tourist arrivals are suffering 90-minute waits to clear immigration.

Phuket’s accommodation sector is coping with the growth – for now.

There are 43,571 registered hotel and accommodation units on the island. In H1 (January-June) market-wide average occupancy for all hotel classes surged to 72%, with Patong, which has moved into the mainstream, tallying in at 82%.

Meanwhile, new hotel developments are set to increase island occupancy by 16%, or 6,968 rooms, by the time the new airport expansion is complete.

The hotels can cope with the growth as long as the room volume is there, but it is coming at a cost in terms of rate growth, which is flat.

The long-term issue is that double-digit rate growth is not sustainable.

Back to the airport, the question remains: “Will Phuket Airport’s current upgrade have only a short-lived effect, and will the facility need further upsizing a few short years after roll out?”

“The increase in number direct flights into Phuket is resulting in better air accessibility into Phuket and affordability of travel the destination,” said Michael Ayling, Managing Director of Laguna Resorts and Hotels.

“As long as the infrastructure keeps pace with the increased numbers of tourists, expansion of hotels and faculties are well planned and implemented, the hotels will be able to properly manage their room rates in line with the supply and demand dynamics,” he added.

As the northern part of the island is preparing for work to start on the new international convention and exhibition center, Minor International’s Bill Heinecke said, “We have reviewed opportunities to expand our very successful Anantara Vacation Club and Mai Khao is the destination of choice for a new 100-key resort that is set to open in late 2012.

“The investment in the area by the Thai government is a solid fundamental assuring sustainable growth,” he added.

The hot potato for the moment is that the tourism industry could be derailed without a greater sense of urgency by AoT and immigration officials in implementing significant initiatives sooner rather than later.

Phuket Poll: When will Thaksin return?