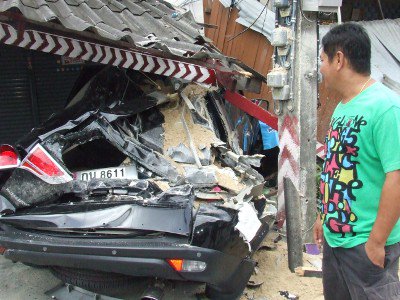 PHUKET: Three people were injured when a six-wheeled truck hauling sand ran out of control, crushing vehicles and smashing into shops on Phuket’s west coast this morning.

Truck driver Rungaroon Ji-nga, 31, was descending the steep hill into Patong from Phuket Town at about 10 am when he failed to negotiate the curve in front of Wat Suwan Khiriwong (Wat Patong).

The truck crashed into the big cement traffic barrier set up at the location – after years of similar runaway vehicles at the curve – before slamming into the ‘Rak Cafe’ coffee shop.

En-route into the shop the juggernaut slammed into a Toyota Fortuner car and some motorbikes before tipping onto its side.

Truck driver Rungaroon presented himself immediately to Patong Police for questioning, but officers told him to go to Patong Hospital to receive treatment first and to return later for questioning.

Police said Mr Rungaroon reported that his brakes were functioning at the time of the accident, so they are yet to determine whether Rungaroon fell asleep at the wheel.

Meanwhile, traffic delays are expected while Kusoldham Rescue workers assist local residents in cleaning up the sand and debris at the accident scene.