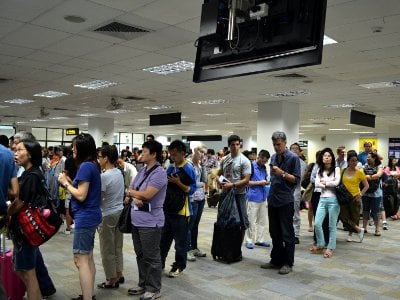 PHUKET: The Tourism Authority of Thailand (TAT) is revising strategies to deal with the economic crisis in Europe and bad situations in the domestic market, such as floods and violence in the South, all of which threaten Thai tourism.

Phuket is featured in the plans despite record visitor arrivals during the first half of this year and what some see as formidable passenger traffic handling challenges at Phuket International Airport.

The new strategies aim to protect existing markets and to revitalize traffic from Europe, which is moribund in the grip of its economic woes. The TAT hopes to maintain key markets such as the United Kingdom and Germany and says it will focus on niches such as honeymooners.

The agency also plans to stimulate emerging markets such as Russia by addressing high-spending opportunity areas such as medical tourism. It will also focus on general tourism from the key countries of Eastern Europe.

The number of Russian visitors to Thailand is expected to exceed a million this year, surpassing the UK which has been the Kingdom’s biggest European tourist market for years.

Juthaporn Roengron-asa, deputy TAT governor for Europe and the Americas, said last week that more than 12 countries in Europe were in trouble because of economic downturns. Five of them – Portugal, Ireland, Italy, Greece and Spain – are facing crises.

Among the tourism stimulation plans, the TAT will seek new sources of visitors by working closely with airlines to encourage travel into Thailand, and specifically Phuket, during the upcoming high season, she said.

Airlines from Poland and the Czech Republic already plan to inaugurate flights into Thailand, and THAI Airways says it will be adding direct flights to Phuket later this month.

During the first eight months of this year, 1.1 million Chinese visited Thailand, a 60% increase from the same period last year. The TAT expects to see 1.5 million tourists from China this year, with Air China increasing its flights to Bangkok and launching direct flights to Phuket this month.

Tourists from South Korea are likewise expected to increase as airlines there also plan to add direct flights into Phuket during the high season.

The Japan market has recovered quickly, with 720,000 visitors during the first eight months of this year, a 28% increase over the same period last year. Japanese tourists are now expected to number close to 1.1 million this year, up from 800,000 in 2010.

To revitalise tourism in the South, the TAT and tour operators in Ipoh, Malaysia, will launch a joint promotion “shortly” to bring more tourists to Phuket, Hat Yai, Nakhon Si Thammarat, Trang and Krabi.

But the TAT acknowledges that 17 countries have issued travel advisories on southern Thailand, but not Phuket, after a bomb blast on September 16 in Narathiwat killed four tourists, with more than 50 people injured.

And nine countries – Australia, Canada, France, Finland, Ireland, Italy, Spain, Sweden and Switzerland – have strongly advised their citizens not to go to those provinces.