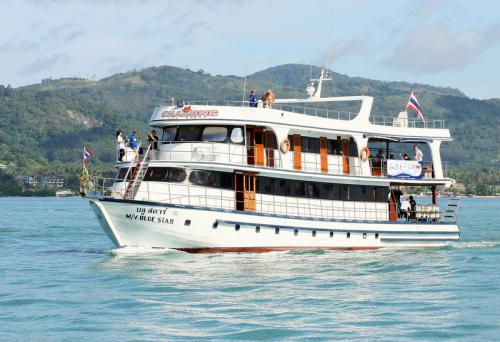 PHUKET: The revelation of the sinking of a third dive boat in the Andaman Sea within the last month has sparked concerns over fire safety issues on all Phuket tour boats.

On February 2, the Phuket-based Bunmee I sank in Koh Lanta National Park after an electrical short circuit caused a fire to erupt in the engine room. Less than two weeks later, the MV Blue Star, also based in Phuket, sank in Myanmar waters under similar circumstances (story here).

Everyone from both vessels was safely rescued before the burning liveaboards went under.

“Boat crew tried to control the fire, but failed,” said Krabi Marine Police Inspector Chaiyasit Kancharoen of the Bunmee I.

The failure of the crew on the Bunmee I and the Blue Star to stop the spread of the fires has prompted Director of the Marine Office 5 Wichai Khamkong to raise the issue of adding fire fighting training to the Department of Disaster Prevention and Mitigation (DDPM) annual training seminar.

“This would be done to ensure that boat crew are capable of putting out fires,” Mr Wichai said.

“Fires in the engine room from poor wiring or corroded wires can happen. Annual checks by the Marine Office can’t prevent them.”

“Engine fires are a well-known hazard on any ship or yacht, which is why any vessel that operates to international marine standards will have a fully automatic fire response system in the engine room,” Safer Phuket founder Duncan Stewart told the Phuket Gazette. “The recent spate of incidents has highlighted the need for increased training, regulation and compliance and this is a core component of the Safer Phuket project (story here).”

A dive shop manager who asked to remain anonymous agreed that though Phuket hasn’t historically had fire problems on tour boats, the installation of fire safety systems, such as aerosol systems, in the engine room and other parts of the boat would be the best way to prevent future incidents.

“It’s not very expensive really. Pull a lever and the system goes off and kills the fire straight away. You can put up wires and it can release automatically when the wires are burnt,” he said.

“Look at the statistics. I don’t remember when [a fire on a dive boat] happened last time, and now it has happened a couple of times in a couple of weeks. It could have happened anywhere in the world actually, but unfortunately it happen right here and surely we have to deal with it.”

In an incident unrelated to fire, the liveaboard dive boat MV The Flying Carpet (story here) sank to a depth of 75 meters between Koh Bon and Koh Tachai in the Similans on January 29.