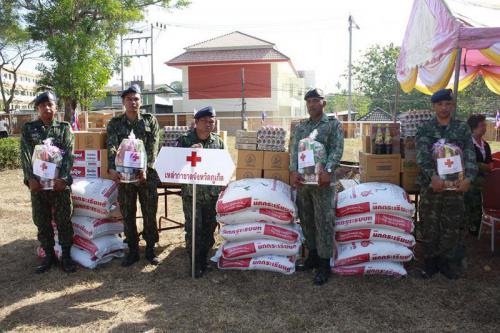 PHUKET: A celebration marking the 60th anniversary of the foundation of the Civil Defense Volunteers was hosted by Governor Maitri Inthusut on Monday.

At the ceremony, which took place at the volunteers’ office at the back of Phuket Provincial Hall (map here), volunteers took their yearly oath of office and received the warm thanks of the governor.

The volunteers’ commander, Interior Minister Jarupong Ruangsuwan, expressed his gratitude through a letter that was read out to volunteers during the ceremony.

“Thank you all for your service to the community. You are a good example of unity, which is especially important in our country right now. Please keep up the great work you have been doing,” Gov Maitri said.

As thanks for the volunteers’ services, the governor distributed certificates, gift packages and scholarships.

Gov Maitri concluded the event by urging the 86 volunteers to continue being good role models for the community.