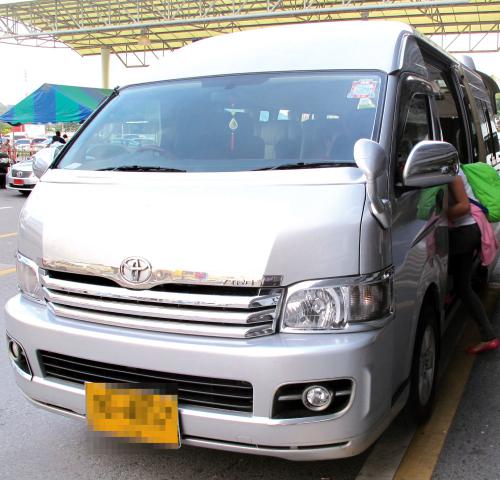 A ROUTINE visa run to Penang late last month hit a speed bump at the Malaysian border when visa runners returned to the van from the immigration checkpoint to find their driver had absconded.

It had been business as usual for the passengers until they reached the border checkpoint in Sadao on January 20.

“This time was the same as always. We had one driver from Phuket to the border of Malaysia, but we changed drivers once we arrived at Sadao,” explained Klaus Klaeden, 47.

After crossing the Thai-Malay border, the KBV passengers left the van and walked through the Malaysian immigration building so officers could check and stamp their passports, Mr Klaeden said.

“When we exited the building, we found our van waiting with the engine still running,” he said.

“The driver wasn’t there, so we assumed he was in the restroom. It was early, about 6am, so after a few minutes everyone fell asleep.”

One of the passengers woke about 30 minutes later to find the driver still missing and the van still running. He woke the other passengers, including Mr Klaeden, and the group began to search for the driver.

After scouring the grounds and questioning border police, the visa runners concluded that their driver had gone and taken all of the money collected for the trip.

Mr Klaeden estimates that about 37,000 baht was stolen and four travel hours were wasted during the ordeal.

The passengers contacted KBV and the company sent a new Malaysian driver to pick them up and take them to their hotel. They arrived in Penang at 12:30pm rather than the standard 8:30am, but still made it to immigration in time to file their visa applications, ensuring no further delays.

The owner of the KBV visa run company said the driver was later arrested by the Malaysian Police and that the stolen money was returned. However, she declined to name the driver or the company he worked for.

Despite the rare circumstances surrounding this visa run, the owner said she believes the company accomplished its overall mission by completing the visa run on time for its customers.

When asked his initial reaction to the situation, Mr Klaeden said, “I was laughing. I could not believe that this was happening. This was my fourth trip with KBV and all of them have gone well.”

The owner said she understands how important these trips are for foreigners staying in Thailand.

“I would like to apologize to our valued customers for any inconvenience caused by this trip. This is the first time ever that we have encountered such a situation.”