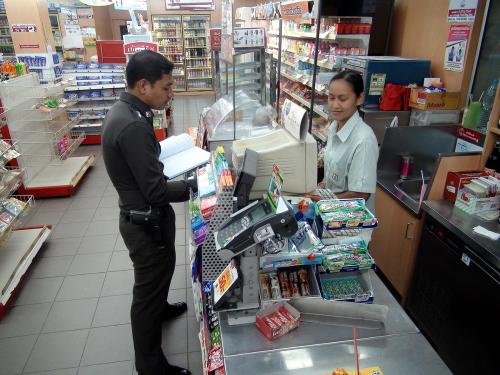 PHUKET: Police are searching for a snatch thief who stole 5,000 baht from a cash till at a 7-Eleven in Wichit late last night.

“The thief was a dark-skinned man who looked about 20-to-30 years old. He was between 1.60 and 1.65 meters tall, and had short hair. He wore a long-sleeve white shirt and black trousers,” store employee Narumon Showsoongnern told the police.

Ms Narumon explained that there were no customers in the store at the time of the theft, and only three staff were present.

“I was at the cashier counter, one worker was checking stock, and the other one had just gone to the toilet,” she said.

“The thief pretended to be an ordinary customer. He put some bread on the counter and pulled out a 100-baht note. While I was taking care of the transaction, he swiftly snatched money from the open till and fled,” Ms Narumon said.

“I thought he might attack me, so I did not resist or shout for help. After he ran away, I called the police. However, I did not see his vehicle because I was too frightened to follow him,” she said.

No CCTV footage of the incident was recovered, as the camera was under maintenance, Lt Somboon Malai of the Wichit Police said.

“However, we will search for more witnesses and question them,” he said.