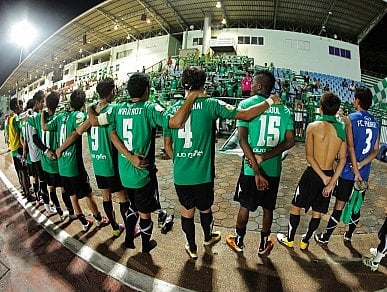 Sixty four teams are entered in the first round with 21 games being played today. A further nine matches are scheduled for tomorrow, June 19 and the remaining two games will be played on Sunday, June 26.

Thanyaburi FC was established in 2009 under the name Rose Asia Pathum Thani and played their first highly unsuccessful season in the Regional League Central East division, winning a solitary game against Rayong United and also failing to qualify for the Thai FA Cup.

A change of club name to Rose Asia United Thanyaburi FC and a Football Association of Thailand (FAT) sanctioned move to the AIS Bangkok Regional Metro League did not improve their fortunes.

The club finished the 2010 season in 13th place out of 13 teams in the league, and again went no further than the qualifying stage of the Thai FA Cup.

Incidentally, this is the same league in which Bangkok Christian College FC compete – the team that suffered a 7-3 demolition at the hands of FC Phuket in last Wednesday’s Thai FA Cup first round.

FC Phuket’s recent run of good form and prolific scoring does not bode well for Thanyaburi. A score draw and a 4-1 win in their last two league matches added to the seven scored earlier this week, brings Phuket’s goal tally to 12 in three matches.

Two areas of concern for Phuket fans and new coach Sompong “Rock Rhino” Wattana will be the lack of clean sheets, indicating a slightly shaky defense, while the previous two victories have been on home turf.

Sompong’s disciplined style of football has clearly improved Phuket’s attacking capabilities – hope is that this will also be absorbed by the defensive line and the Southern Sea Kirin will return another positive result.

Kickoff today is at 4pm. The Phuket Gazette will post results from first round matches later this evening.

Phuket Poll: What is your favorite chain of convenience stores on Phuket?