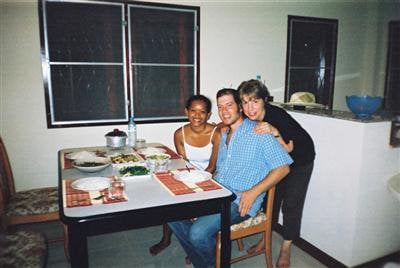 PHUKET CITY: Thailand’s five-year effort to extradite fugitive murder suspect Sam Van Treeck to stand trial for the stabbing murder of Chompoonut ‘Jeab’ Kobram in Pattaya in 2004 appeared to take a step backwards on December 31 when a Belgian court granted his release from prison on a conditional basis.

Van Treeck, a former tour guide in Thailand, was charged with the brutal stabbing of Ms Chompoonut in mid-2004.

Ms Chompoonut, his former girlfriend and a native of Buri Ram, was working as a divemaster in Phuket at the time of her death at age 23.

Engaged to Canadian Noah Meyer at the time, Ms Chompoonut traveled to meet her ex-boyfriend Van Treeck in Pattaya. It turned out to be a fatal error: she was found dead with 48 stab wounds on June 25, 2004 in Van Treeck’s Pattaya apartment.

Van Treeck has consistently denied murdering her, claiming that the victim was already dead when he arrived back home after going out to drink beer.

The Belgian was granted bail by the Pattaya Court on September 21, 2004, the day after charges were filed against him. He posted a ‘rented’ chanote land title deed as surety.

He was charged under Section 289 of the Penal Code, which states: ‘Whoever commits murder on another person by employing torture or acts of cruelty shall be punished with death.’

After his release he fled to his native Belgium, which refuses to extradite in cases where the suspect could receive capital punishment.

After living as a free man for five years, Van Treeck was arrested on June 30, 2009 for the murder after a court order allowed listening devices to be installed in the home of his father, the Belgian press reported.

His detainment was once extended, but he was finally allowed to leave prison on December 31 as the court ruled he did not present a threat to Belgian society and his detainment was no longer deemed necessary for the investigation, the Gazet van Antwerpen reported.

“Finally they have realized that my client is no longer a danger to public safety here,” his lawyer was quoted as saying.

For previous stories about the case, click here, here, here and here.