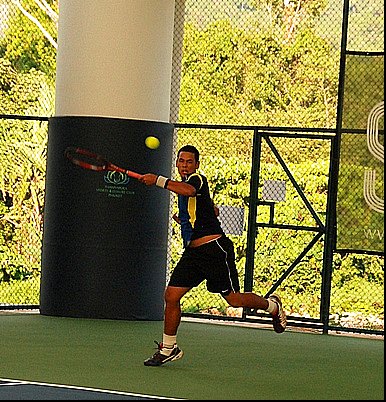 PHUKET: Following their success at the recent Thanyapura Tennis Challenge, Tachakorn Tonnon and Pavaporn Limsakul are now preparing for another opportunity to showcase their talents at the Chang International Tennis Federation (ITF) Thailand Pro Circuit 2011 tournament.

Enthusiasts of the sport in Phuket are also anticipating an exciting exhibition of tennis from a number of the finest players in the region, to be held at Thanyapura Sports and Leisure Club’s (TSLC’s) new world-class courts from October 29 to November 12.

This event is not to be missed, being the first ITF tournament to be held in Phuket and featuring a number of pros from international circuits.

Thai Davis Cup team player Danai Udomchoke (ranked 199 in the world), rising star of Thai tennis Kittipong Wachiramanowong (ranked 522 in the world), and Thailand’s number one doubles partnership of Sonchat and Sanchai Ratiwatana will be the top seeded players to watch for.

Both prize money of USD10,000 and important ITF ranking points have drawn these top professional players to this tournament

TSLC Vice President David Roberts said having the best Thai talent at the event was sure to provide a boost to the quality of Phuket’s first professional tennis tournament.

“It is an honour to host Phuket’s first professional ITF event and it is a great indication for the future of the sport at the Thanyapura Sports and Leisure Club,” Mr Roberts said.

“I am sure it will be the start of a long relationship between the ITF and the TSLC to promote tennis in Phuket and attract more players onto their circuit and we look forward to be the venue for more of these professional events.”

Mr Roberts added that the upcoming event was part of a long-term plan by the TSLC to attract more tournaments to the club as it is equipped with grandstands big enough for 600 spectators. He noted that it is also a great venue for professionals to practice as they follow the various circuits around the world.

The tournament draw will be made today immediately after sign-in for the singles competition (4-6pm) in the ITF room at TSLC’s Clubzone.

Sign-in for the doubles competition will also conclude on Sunday, before 12pm.

The main draw for the singles and doubles competition will begin play on Monday at 10am.

The Phuket Gazette sponsors the Chang ITF Thailand Pro Circuit 2011 tournament and will keep readers posted on results as the tournament progresses, online and on the air with bulletins from the Gazette’s radio partner, Blue Wave 90.5fm.