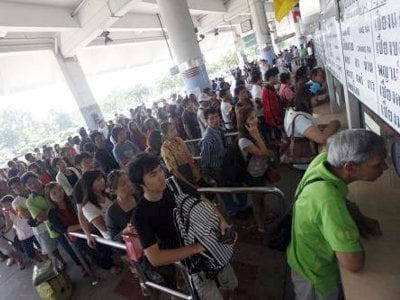 The exodus gathered pace yesterday, with long tailbacks on outbound highways with cars and adding to packed accommodations in Pattaya, Hua Hin and Chon Buri, among other destinations.

For days, Bangkokians have been locking up their homes and migrating to resorts or relatives’ homes outside the capital, but after the government on Wednesday announced October 27, 28 and 31 to be public holidays in 21 flood-hit provinces, the intermittent streams yesterday became a flood of stressed-out safety seekers.

Fuelling the rush out of Bangkok was the city administration’s declaration of evacuation zones. Residents of Don Mueang, Bang Phlat and Sai Mai districts have been told to leave their homes. Partial evacuation was also announced for Thawee Watthana district.

Traffic jams were reported on many roads leaving the capital. Towards the Northeast, motorists crowded Highway 304 from Bangkok, Chachoengsao and Prachin Buri to Nakhon Ratchasima, while heading south, the road to Prachuap Khiri Khan’s Hua Hin and beyond saw heavy traffic.

The Transport Co has added 1,000 more bus services to serve people wanting to return to their home towns. President Wutthichat Kalayanamit said its terminal no longer had leftover travellers because the company had brought the total bus trips available to 4,000 per day and would support 200,000 travellers.

Many travellers could expect to reach destinations up to five hours late, he said, as roads were flooded.

Mor Chit 2 Terminal was packed. Renu Sukthat said she had been staying with a relative in Bangkok’s Srinakarin Road area because her Phichit home was flooded. But now, since Bangkok’s water was rising, she had decided to go home.

Hotels in Bangkok and nearby destinations such as Pattaya and Hua Hin are gaining more business, with many already fully booked.

Supawan Tanomkietipume, chairman of the marketing department of the Thai Hotels Association (THA), said many hotels and condominiums in Hua Hin and Cha-am were gaining higher occupancy rates as people check in for short stays.

Airlines operating out of Bangkok’s Suvarnabhumi Airport are reporting full bookings through to the end of this year, as passengers are either unable to travel by car through flood areas or do not wish to take buses through time-consuming alternative routes.

“Operators [in Bangkok] are gaining thousands of room-nights since the water flow reached the capital this week,” Ms Supawan said.

The higher demand from local residents could make up for cancellations by foreign tourists, since many countries had issued high-profile travel warnings about Bangkok, she added.

According to the THA, many operators so far had not profited from the higher occupancy rate as they were offering lower prices to help those affected by the floods.

More than 30 THA members last week offered rates of as little as 600 baht, 900 baht and 1,200 baht per night until November 5. All these rooms were sold within days of the campaign launch.

The association is considering extending the campaign as the floods continue.

A group of hotels in Pattaya this week introduced special deals for flood-affected families in Bangkok. Many house owners in Pattaya are offering long-stay deals for families, but some people expressed fears that rates might climb to 25,000 baht per month.

Thanyapura serves up ITF tennis for Phuket on Saturday