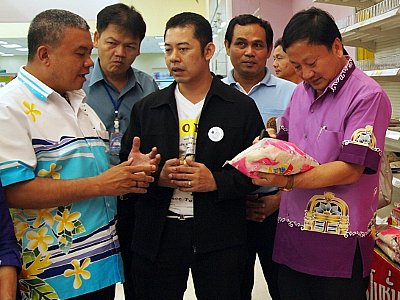 At each store, Gov Tri and his entourage were welcomed by the store manager and taken on a guided tour of the aisles.

The Tesco Lotus superstore on bypass road was the first stop on the tour, followed by Big C Phuket, also on the bypass road, and wrapping up with Super Cheap on Thepkrasattri Road.

All three were short of some products, such as popular or cheap brands of rice, condensed milk, sugar, water, instant noodles and dry food products.

However, where stocks had been cleared of the popular or cheap brands, other more expensive brands of the same essential items were still available, including bottled water.

The management at all three retailers explained to the governor that the problem resulted from the floods in and around Bangkok and Central Thailand.

Some manufacturers have been forced to cease production, as their factories are under water, and those that are still in production have inflated transportation costs to cope with as delivery vehicles have to navigate flooded roads and highways.

“Overall, I think we still have enough goods for consumers. I just want to ask for cooperation from all stores not to raise prices or hoard consumer products,” said Governor Tri.

“The prices of all products at all stores are to remain the same. I told all stores that if it were necessary to raise prices, to please not raise them too much. People are already suffering from the crisis,” he added.

“The government is now trying to solve the problem by importing products from other counties,” Gov Tri said.

Boonsom Anantajaroonwong, the Managing Director of Super Cheap, explained, “We may have fewer consumer products for sale compared with before the crisis, but we still have items in stock.

“Many manufacturers have been affected by the floods and they cannot produce anything because their factories are flooded. Some manufacturers who can still produce have problems transporting their products to retailers,” he said.

“We may have to adjust the prices of some products, but I can guarantee that it would not exceed 3 to 4 per cent of the original price.

“Since we have to buy these products from wholesalers [and not direct from the manufacturer], it is impossible for us to bargain over prices,” he added.

Thanyapura serves up ITF tennis for Phuket on Saturday