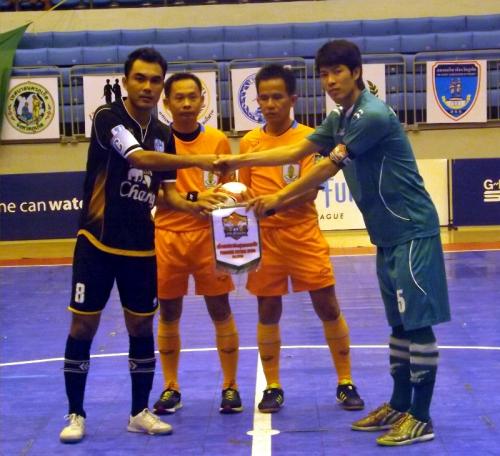 The visiting team broke the ice early with a quick goal by Witoon Thapina.

Though Phuket enjoyed many chances to equalize, Prachin held on to their lead for much of the first half.

Phuket’s Jardel finally found the equalizer in the 15th minute, but the visitor’s Witoon was having a good half, and responded with a goal two minutes later.

Prachin demonstrated a clear competency in executing rapid counter-attacks and combination plays, with Witoon completing his hat trick in the 18th minute, bringing the score to 1-3 to the visitors.

Seconds later, Phuket were back in contention as is the nature of futsal.

Following up on a deflected shot, Phuket’s Marcos pierced the back of Prachin’s net with a powerful effort from the right wing.

Phuket United’s leading scorer Jackson Santos scored the equalizer in the final minute of the half.

Prachin were unable to maintain their momentum in the second half, and the home team appeared the hungrier side.

After a number of exchanges, Phuket finally went ahead nine minutes into the half.

The match was sealed in the final minute with a goal by Jardel, his second of the match.

Phuket United will look to win their fifth straight game this Saturday at home against Samut Prakarn.

The match will be the Pearl’s final home match of the season, so fans should not miss out on this opportunity to be part of one of the most fast-paced and thrilling indoor sports that the island, and country, has to offer.

Kickoff is 7pm. Students with ID and kids under 150cm get in free, while admission for everyone else is 100 baht.

The Pearl will then wrap up their season with two away matches, first on Wednesday, March 13 against Bangkok FC, and then after a break, they play their final match against Highways Department on Friday, March 29.

US Embassy to stage “outreach visit’ to Phuket