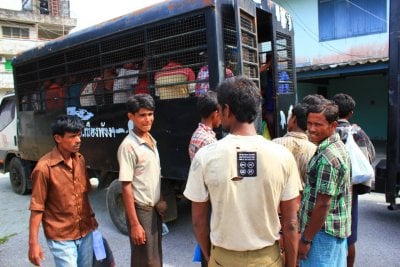 PHUKET: Heavy seas on Saturday forced a boat loaded with 112 Rohingya, attempting the perilous journey to Malaysia, to land north of Phuket on Tai Muang beach in Phang Nga, where they were promptly arrested by the authorities.

According to police the boat was part of a flotilla of seven boats ferrying over 1,000 Rohingya that departed their native Rakhine State on the western coast of Myanmar on November 2.

Lt Chaiyuth Boonyai of Tai Muang Police Station said that the Rohingya were spotted leaving their stricken vessel and making for the shore near to the Tai Muang Industrial and Community Education College.

Police charged the new arrivals with illegal entry into Thailand and took them to Tai Muang Police Station for questioning before handing them over to Phang Nga Immigration officers.

The plight of the Rohingya has been well documented by the United Nations and other international NGOs. In June the BBC reported that 57 Muslims and 31 Buddhists had died, an estimated 90,000 people were displaced and over 2,500 homes were burned during sectarian violence.

A report submitted to the UK Parliament indicated that the Burmese Army and police were playing a leading role in targeting Rohingyas through mass arrests and arbitrary violence.

The figures jumped dramatically in October with reports of a further 80 deaths, 20,000 displaced persons and an unknown number of homes burned, believed to run into thousands.