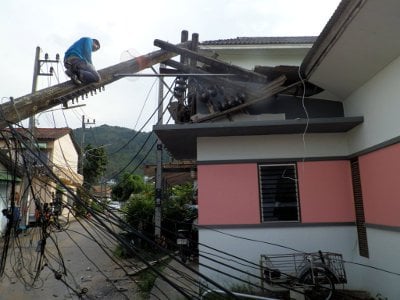 PHUKET: A power pole that fell onto a house and injured a man in Phuket yesterday was unstable due to the water erosion caused by a burst water pipe, locals told the police.

Police received the report of the incident at about 3pm and arrived to find power lines hanging on the ground near a freshly dug waterline trough on Soi Baan Nua Ton in Cherng Talay.

“The villagers told us that construction workers burst a water pipe in the area, which caused the earth around the power pole to erode and the pole to fall over,” said Lt Col Yotpat Suwannasit of the Cherng Talay Police.

The injured Burmese national Mr “Yao” was sent to Thalang Hospital with a head wound after the pole came crashing down onto the house. However, he was released later that day, said Lt Col Yotpat.

“We have contacted those in charge of the construction as part of our investigation,” he added.