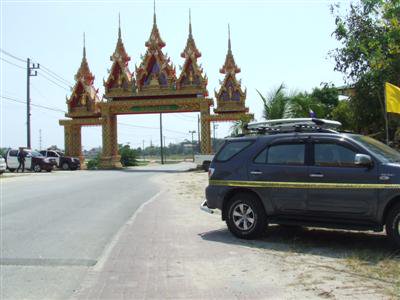 CHALONG, PHUKET: The owner of a tour company is unconscious but in stable condition after being shot in the neck at a well-known temple where he and his family had just finished offering alms to make merit on Makha Bucha Day.

Just before noon yesterday, Chalong Police were informed of a shooting in the parking lot of Wat Luangpoo Supha, in Chalong Village 6. By the time they arrived, the victim had already been rushed to Vachira Phuket Hospital by rescue workers from the nearby Phuket Ruamjai Kupai Foundation.

The crime scene was crowded with people who had also come to make merit on Makha Bucha Day. All were shocked that such a crime could be perpetrated on temple grounds in broad daylight on one of the holiest days of the year.

Duty Officer Parichat Jaturonphan identified the victim as 37-year-old Chalermpol Pranweerapaiboon. Doctors performed emergency medical treatment, but have yet to remove the bullet from the victim’s neck. The caliber of the bullet has not been reported.

The shooting occurred in the temple parking lot, just 20 meters away from the living quarters of Luangpoo Supha, Phuket’s most famous monk, who is reputedly 114 years of age.

The victim’s wife, 35-year-old Ayarat Pranweerapaiboon, told police that her husband was getting into the family’s vehicle when he was shot.

She, the couple’s two daughters and the victim’s mother-in-law were already inside the automobile when Mr Chalermpol was approached from behind by a man who shot him once in the neck near the base of the skull before fleeing on a motorbike.

Mrs Ayarat told police she initially thought someone had let off a firecracker, then was shocked to see Mr Chalermpol collapse to the pavement.

One of the daughters described the shooter as a dark-skinned male, about 25 years of age, 165 centimeters tall with very short hair. He was wearing a red t-shirt and jeans. He remains at-large as police efforts to block local roads and cut off escape routes came too late.

The victim and his family live just 800 meters from the temple in the Private Lagoon housing estate. Mr Chalermpol is the owner of the Kata Auto Travel and Tour company on Thaina Road in Kata, where he also runs a guesthouse.

Pol Maj Parichat said that police are investigating several potential motives, including the possibility that the victim might have been involved in a business dispute.