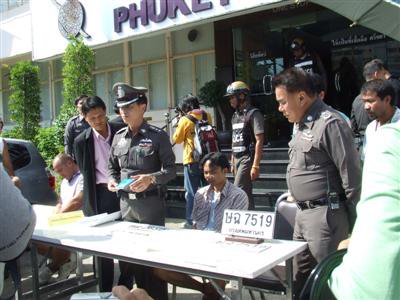 PHUKET CITY: Checks of vehicle registration data by police have revealed that some cars on Phuket’s roads are stolen vehicles with fake license plates.

The first vehicle, a black Honda Civic driven by 37-year-old Wimon Chantong of Thalang, came under closer scrutiny after narcotics were discovered inside it during a routine search in Kathu. Running the license numbers through the police database revealed that the Bangkok-registered plates were copies of real ones belonging to an owner in Saraburi.

Police suspect that the car was stolen in Malaysia, fitted with fake plates, smuggled into Thailand and resold to Ms Wimon, who then rented it out to tourists.

In the second case, a black Toyota Vios driven by 29-year-old Suriya Sumalee of Phang Nga was pulled over at a checkpoint on the beach road in Patong at 3 am on January 4.

Mr Suriya was unable to produce the car registration book when asked and a subsequent inspection of the Bangkok license plates and tax sticker revealed them as forgeries. Further investigation on January 20 revealed that the car was earlier reported stolen in Bangkok by its rightful owner.