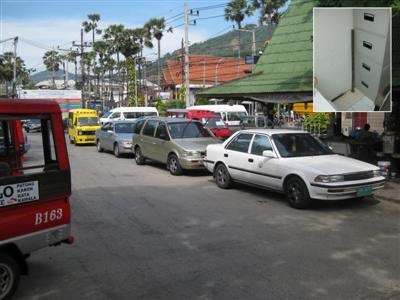 PHUKET CITY: The director of the Tourism Authority of Thailand (TAT) office in Phuket says her agency is ‘working on a plan’ to deal with aggressive tuk-tuk drivers in Phuket, the Gazette has learned.

Bangornrat Shinaprayoon, director of the Tourism Authority of Thailand (TAT) South Region Four office in Phuket, told the Gazette today that she was aware of the problems, but said her office in Phuket Town had not received many complaints from tourists over the issue.

“We have a plan which has not been made public yet. We have to wait for it to be announced by the Minister of Tourism and Sports. The problem is very important as it affects tourism, so I would like local organizations including the police to co-operate to work out the problems,” she said.

The Gazette explained that its editorial offices and on-line forum have been flooded with complaints from around the globe by disgruntled tourists complaining about being overcharged for tuk-tuk rides or forced out of public parking areas by gangs of tuk-tuk drivers who monopolize them illegally for their own benefit. Many have vowed never to return to the island as a result of their experiences with taxi and tuk-tuk drivers.

Ms Bangornrat, who took up her post last month, said word-of-mouth complaints among foreign tourists about transport in Phuket was certain to have a negative impact on tourism, but it is difficult to assess exactly what the long-term effects have been.

“I haven’t had any information about the impact on tourism, but I can say that the TAT is concerned about this matter,” she said.

Last month, Minister of Tourism and Sports Chumpol Silpa-archa held meetings in Bangkok to try and solve transport problems there as well, and police were asked to play a more active role, she said.

Phuket Governor Wichai Phraisa-ngop has already set up a work group to study the issue, she said.

At a meeting of Provincial Department Heads at Phuket Provincial Hall this morning, Gov Wichai raised the topic of tuk-tuk gangs and said his office had received numerous complaints, especially from Patong.

In some cases, people who defy tuk-tuk drivers’ demands not to park in certain public parking areas have had their vehicles vandalized, he said.

Other tourists have complained about being overcharged for damages to rental cars, he told the meeting.

Gov Wichai asked the heads of each department to work on the problem, but no official strategy was announced.

In an update on the case of the French family who were attacked outside Karon Municipality offices in Kata by a man thought to be a tuk-tuk driver, Chalong Police say they know the identity of the man and that a summons for him to appear for questioning has been issued.