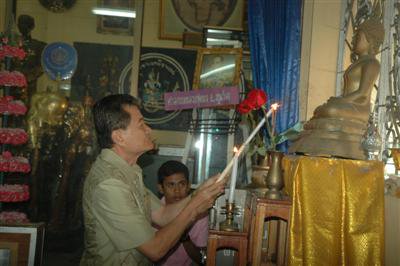 PHUKET CITY: The Phuket Governor and his wife this morning took part in a ceremony praying for good luck during the annual Red Cross Fair that starts at Saphan Hin tomorrow.

The ceremony was led by Governor Wichai Phraisa-ngob and his wife Thaisika, who as the governor’s wife, is president of the Phuket chapter of the Thai Red Cross Society.

The event took place at the Prince of Chumphon’s memorial shrine, not far from the main staging area at Saphan Hin where the fair will take place.

The top prize in this year’s Red Cross charity raffle will be a 2.7-million-baht house in Thalang.

It is the first time a house has been raffled off at a Red Cross Fair in Thailand.

The house was donated by the Phanason Group, which has seven large real estate projects completed or underway on the island – including the controversial Phuket Phanason City Project in Tambon Wichit.