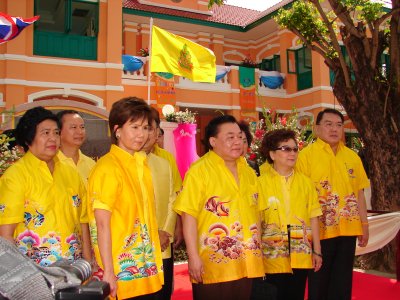 PHUKET CITY: The Tourism Authority of Thailand opened its new Region 4 branch office on Saturday with an opening ceremony presided over by caretaker Tourism and Sports Minister Pracha Maleenont.

The 14-million-baht office is a bright orange, two-story edifice built in the Sino-Portuguese style and located on one rai of government land next to Queen Sirikit Park on Thalang Rd. It replaces the old TAT office on Phuket Rd, which was built some 30 years ago and was deemed too small to cater to the 60 to 100 tourists who visit every day during the high season.

K. Pracha spoke of the TAT’s efforts to increase tourism in Phuket, Krabi and Phang Nga, the three provinces which make up Region 4, and declared that a recent TAT-organized roadshows to Korea, China and Japan had been a success in luring low-season tourists back to the region.

“Tourists are not only returning to Phuket, but are arriving in larger numbers than ever. In the near future we plan to have roadshows to Russia, Britain and India, but we have other duties we must perform first,” he said.

A number of airlines have added flights to Phuket to meet growing demand, including 10 weekly charter flights from Finland scheduled to begin in November, he added.

The TAT would continue to encourage Thai International Airways (THAI) to add more direct flights to Phuket, he said

“THAI is studying each market carefully so that they can gradually increase the number of flights to meet this demand,” he said.

Banker warns of boom in fake cards in Phuket