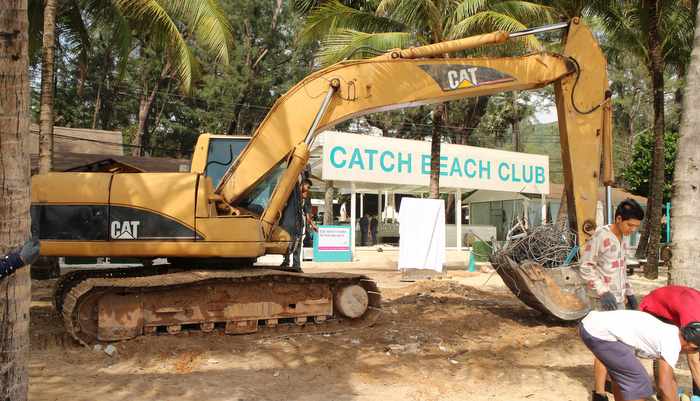 “One-and-a-half years ago I invested 1mn euros in the beach club; I believe that I did everything correctly,” an investor, who asked to remain anonymous, told the Phuket Gazette.

“I talked to local officials and had the necessary permission to build and operate the beach club – and now I am told to pull everything down. Nobody is taking any responsibility.”

The investor explained that he was baffled and furious that if what he was doing was illegal, it was never brought to his attention, as he said he followed the legal channels to get the necessary permits from local officials.

“If I couldn’t do business on the beautiful sand, just tell me. I would not have invested that much money in illegal land,” he said.

“How can you do business in Phuket when it’s like this? Some of my friends who have millions of euros do not want to invest in Phuket. I love Thailand, but look what happened. I am not considering making any further investments here, at least not at the moment.”

Staffers at another affected beach club, Zazada, said that they were still operating, but given the recent news, were prepared to have the club demolished.

Catch Beach Club manger Ben de Bellis declined to comment. The club was to celebrate its 10th anniversary on Surin Beach this year.

The beach clubs, as well as the restaurants and other business on the east side of the Surin beachfront path were occupying units originally built by the government. However, many of the units had been modified, while other structures unassociated with them had been built.

Despite some of the buildings being legal and some of the modifications made to them being sanctioned by the local government, OrBorTor President Ma-ann Samran would like to see them all demolished.

“I admit that we were the ones who gave them permission to modify the buildings, to make them beautiful and to maintain them,” Mr Ma-ann said.

Having already cleared structures illegally built on the beach, the illegal businesses have been given about 30 days to close their doors and 60 days to remove all additional structures.

However, the legal ones are allowed to continue operating for now, confirmed Mr Ma-ann.

“I feel sorry for the people who used to have their business on the land, but the situation has changed. I believe that they have earned enough to just move on now,” he said.

In June, Mr Ma-ann denied English-language reports in Phuket that buildings on the east side of the beachfront path at Surin Beach would be demolished. Nonetheless, he did say that he would follow all Army orders, so if the National Council for Peace and Order (NCPO) demanded that they be pulled down he would comply (story here).

However, the recent announcement to remove the business east of the pathway was not pushed by the NCPO, Mr Ma-ann said on Wednesday.

“This is my decision and my order to remove all the buildings east of the walkway. The NCPO is only my backup. I want to restore the entire beach to its natural state for everyone,” he said.

The only exceptions will be a public stadium and a building that was built in honor of a visit by HM King Bhumibol Adulyadej in 1959.

Mr Ma-ann assured the Gazette that if he is able to have the area cleared, no new structures would be allowed to be built there.

Though the order to remove all illegal buildings at Surin Beach has been issued, the government buildings are a completely different situation, Vice Governor Chamroen Tipayapongtada said.

“Demolishing all the buildings along Surin Beach is not that easy. Some of them are government property. We need to talk about it and bring other government departments into the conversation,” Vice Governor Chamroen said.

“We need to see what needs to be done in order do everything legally. We need to follow the law and examine leases and contracts.

“Part of that will be looking at who was originally given the non-transferable permission to use the buildings, and who is currently using them under what conditions.

OrBorTor officers on Wednesday told the Gazette that the contracts for the buildings in question had expired. However, they were unable to produce the previous contract or any documentation concerning usage rights of the buildings.

The only document made readily available was a site map marking the original 20 units and the names of those who were given permission to use them.

“I cannot make any decisions about this right now. It will take time. We will do things one step at a time,” V/Gov Chamroen said.

“However, I must admit, I want to see the beaches clean. I want both Thais and foreigners to enjoy their holidays in the true beauty of the island.”